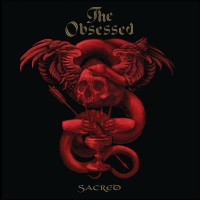 I actually saw The Obsessed in early 1992 during their second era, which was roughly from 1990-1995. Some friends and bandmates wanted to go see Ozzy Osbourne’s ‘final’ tour (oh the irony), so we piled into my 1982 Plymouth Horizon and headed down to Wings Stadium in Kalamazoo. I was not particularly interested in Ozzy, who I already considered washed up, but it was a great bonding experience for a young band. The opener for that show was group I’d never heard of called The Obsessed. (The middle band was Prong, who I still love to this day.)

The sound was typically clunky at arenas in those days, and I didn’t really form much of an opinion about The Obsessed. As the years went by I would become a fan of Saint Vitus, Spirit Caravan, and Wino in general. For those unaware, Scott ‘Wino’ Weinrich is very influential in metal circles. He would certainly be one of the heads carved into the Mount Rushmore of Doom. When it was announced that The Obsessed had reformed and were putting out a new LP, I was glad to give the band another chance. Sacred arrives more than 20 years after the band’s last and sole major label album, 1994’s The Church Within.

Despite my high hopes, Sacred is a mixed bag. On the plus side, The Obsessed did the little things right. The record has nice artwork and packaging. More importantly, it sounds great. Wino’s amazing and distinctive guitar tone is on full display. Things start off promisingly enough with the title track. “Sodden Jackal” is a reworked track from the band’s early days and is a highlight. “Punk Crusher” picks up the mid tempo pace just a bit. The instrumental “Cold Blood” has the best riff. The over six minute “Stranger Things” is my personal favorite and probably the album’s strongest song overall. Second last track “Be the Night” isn’t far behind.

On the negative side, for every cool doom song there’s another that’s pure 70’s radio rock. “Razor Wire”, “Haywire” and “It’s Only Money” are the worst offenders. They’re not terrible songs, they just sound too much like what my cool uncle used to listen to when I was a kid. Ultimately, the lack of deep, dark, desperate dirges left me feeling slightly unsatisfied. I was hoping for a whole lot of “Children of the Grave”, and I ended up with too much “Cat Scratch Fever”. I still have the utmost respect for The Obsessed, but file Sacred under albums I wish liked more.