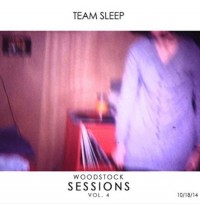 Recorded on 10/18/14, nearly ten years after their Self-titled debut, Team Sleep gathered at Applehead Recording studio in Woodstock, NY to perform an intimate show for a small group of lucky fans.

It has been a while since Team Sleep did anything outside of small West Coast tours supporting their debut album. Their presence on the net was always mysterious and whenever a rough demo dropped on their Myspace or Facebook page, it was quickly swallowed up by fans and dissected fiercely. The majority of those leaked demos were instrumentals, displaying the bands style of Lo-Fi Space-Rock and dashes of Dream-Pop and Indie Rock. Once announced in 2014 that the band was back together recording again, a fever pitch erupted and hardcore fans waited, seeking knowledge on what was going to take place.

Sadly, not much happened except for more demos being release on the bands internet page (Demos 2007 and Broyhill Demos) and no word from any member of the band except for the off remark of “We’re tinkering around in the studio trying out new stuff. Finding time to get together to do work outside our main bands. Etc…” You know, the usual thing you hear bands mention when they are working or whatever.

On October 18th, a revamped lineup of the group got together and recorded this live set. How people found out about it in short notice, I have no idea except they must have spent a lot of time on Facebook or something. Anyway, while this is not “new” stuff, it is still awesome to hear.

Just to get this done with, since many say he is so-so live, Chino is absolutely on point here. I don’t think I’ve ever heard the guy sing as well as he is during this set. His vocals on classic Team Sleep songs like “Ever (Foreign Flag)” “Your Skull is Red” and “Blvd. Nights” are outstanding and you can understand now why the guy has a cult following.

Replacing Zach Hill is drummer Gil Sharone (Marilyn Manson, ex-Dillinger Escape Plan). He does an admirable job and Zack Hill missing isn’t much of a bother at this point in time. The dudes busy with that Hip-Hop band of his anyway… In addition, Chuck Doom from Chino’s other project Crosses plays bass on here and he’s great as well. It’s nice to know that DJ Crook, Tod Wilkinson, and Rick Verrett also came back.

The set list has mostly songs from the debut album, but also some old fan favorite demo songs like “Format” and “Death by Plane”. Two new instrumental tracks also included, “No” and “O.P.”, give the show more depth and that nice gentle wall of sound that many like. Ending the gig with “Live from the Stage” was a nice choice too. The song is a restructure of a very old Team Sleep track, “Natalie Portman”. Played live, the song is powerful and gives so much emotion that you are left wanting more.

Not enough to feed the hungry, what you get here is an appetizer of chips and dip with no main course.

This was a stopgap thing and who knows what the band did during those supposed recording sessions they hinted at. Chino was also busy with Crosses, Palms, Deftones and now some other super group called Saudade, which with all the talent involved in that band, they’ve only release a simple instrumental demo… Go figure.

If you dig Space-Rock bands like Duster, or Hum then this live Team Sleep album is an obvious choice for a quick listen. Just know that the band is M.I.A. these days. However, you never know when they might surprise the fans again with something awesome, so it’s always a nice treat when scraps come out.

Another studio album would be nice though fellas…

(*The Woodstock Sessions are small intimate gatherings for bands to perform live in front of fans and release the recordings, thus the Vol. 4 tag since this was the fourth showcase for an artist at the Applehead Recording studio in Woodstock, NY.*)