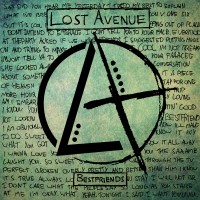 Straddling the focal point between emo, screamo, and straight-up punk rock, Northern Ireland’s Lost Avenue have put together four songs that would best be described as “punk avante-garde” on their new EP, Best Friends.

Tackling this album is a tricky prospect. You can tell each song is by the same band, and there are similar qualities, but there are also enough differences that it doesn’t feel like a cohesive album (to be fair that isn’t a fault and, taking into account their music, likely intentional).

The lead track, “Stop It, Jack,” launches into a hard-as-hell intro and some impressive lungs as lead vocalist Dylan Bradley screams at you with full force. But as soon as you become acclimated, the band strips it all down into a jaunty little jingle and near soft whisper that seems so one-eighty from what you just heard that it almost knocks you off of your chair.

Following this up is “Embarrassing Myself,” which seems to be the most straight-forward track on the album. A bit more rock and roll, Bradley’s voice occupies that small space between TLA’s Brendan Kelly and LaGrecia’s Jason Shevchuck. This song is good, don’t get me wrong, but it doesn’t seem as memorable compared to what the other three songs have to offer.

The third track, “I’m A Vegetarian (I Can’t Eat That),” is a song so broken it just shouldn’t work. It is also my favorite on the album. If Bradley was doing his best Kelly/Shevchuk impression before, in this song he's straight-up channeling them. The song takes a 1-2-3-2-4-2 pattern starting with a rambling intro before finding its footing and building its energy, it then rips into a great chorus that seems awesome until you get to the third line and the vocals change for a single word, where it becomes pretty damn awesome.  Next it enters into a strange breakdown section, hits the chorus again, pulls off an instrumental section, and then throws the chorus at you once more before finishing up. Each time the chorus plays, the energy builds up more and more until, by the third time through, the vocals are a rambling mess trying to keep up with the music, which itself is bursting at the seams in ferocious and nearly uncontrollable energy. I could listen to this song over and over.

Rounding it all up is the title track “Best Friends.” The most “radio friendly” of the bunch, this song is likely the most intricately composed of the four, switching between a gentle whisper and plucked guitar strings echoing in their best surf rock impression, to pounding sections with more rhythm and less screaming that the opener, but still pretty hard. There is a lot going on at all levels, and makes “Best Friends” a worthy end to the album

There’s a lot of great stuff on this album to enjoy, and some weird stuff, too (the “uuuuuAAAAAAHHHH” in “Stop It, Jack” gave me strange 80’s Gravitron flashbacks). Dualta Lewington lays down great bass lines and backing vocals, while percussionist Michael Brown keeps a solid foundation with his drumming. Production is slick and sounds pretty good, although the drums probably could’ve been a better presented- they come off a bit muddied in sound, and a lot of the fills and rolls get lost through it all. There are also a few points where Lost Avenue’s ambition maybe goes too far, as a couple of the transitions between different sections seem a bit slapdash and poorly planned. Bear in mind, that’s a few out of a whole lot, so its not too worrisome.

Lost Avenue has been around since 2010, and has a couple releases under their belt. “Best Friends” is a big step forward in moving this band forward. I’m always a bit leery when a band puts out a great EP instead of a great full-length. Let’s hope these guys have a lot more stuff like this in the pipeline because, if they do, then they are definitely going places.

The New Lows: All Our Roads