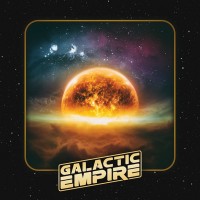 So, my search for something musically different has led me almost full circle. I’m not much of a science fiction nerd, but Star Wars has been a part of my life for almost as long as I can remember. The first film (which somehow became known as A New Hope in the 90’s) came out in 1977, and I saw it with my dad at a second run theater in 1978. I was five years old. I’ve been aware of John Williams’ epic songs for nearly 40 years. “The Imperial March” sent chills down my spine long before Ramones, Sex Pistols or Misfits.

Galactic Empire is a five piece band that plays heavy metal versions of your favorite Star Wars songs. They do it in full costume including Darth Vader and various Storm Troopers on guitar, and Boba Fett on drums. They also do it with unbelievable precision, recreating almost all the sounds with guitar, bass and drums. Double bass drum and chugging palm muted guitar lay the foundation, while the lead guitar plays the sweeping melodies over the top. It’s a little strange to hears John Williams’ expressive french horn pieces played with distorted guitars, but it works.

The familiarity of the songs makes Galactic Empire easier to enjoy than typical instrumental music. “Main Theme”, “The Imperial March”, “The Force Theme” and “The Throne Room:End Title” are songs that many of us already know and love. “Cantina Band” is also familiar and might feature Galactic Empire’s most spastic and impressive musicianship. I enjoyed the LP as background music, but I’m a little sceptical of its replay value. A long time ago in a galaxy far, far away, at the intersection of musical virtuosity and cosplay, this may just find an audience.