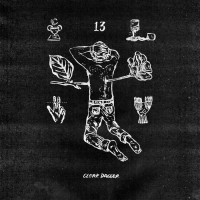 It's about time. It's been eight years since Cloak/Dagger dropped Lost Art, which saw them shift to a more retro punk/garage sound and away from We Are. The latter I admit I enjoyed more because of the hardcore punk influence the band rolled with, wearing their Black Flag influence on their sleeves. That said, Lost Art still felt like a pretty great direction, and it's nice to see I Want Everything continuing in that vein. Seamlessly so, at that.

From the surfer rock vibe of "No Exit" to the garage/psychedelic "Sick Obsession", this album feels like summer's come early. The raw, jagged guitars wrapping around Jason Mazzola's power vocals work so well under this grainy and unpolished sound. The rougher Cloak/Dagger come off, the better they sound. That's emphasized on tracks like "Ruin Theory", which is perfect if you're a fan of toyGuitar, and also "Black Roses" (which feels like The Bronx cutting loose). The one thing I honestly missed was C/D going a bit harder and cutting into a more aggressive stance because a couple of the tracks felt like middling material. That said, it was worth the wait and I hope they don't stop rolling on from here. I Want Everything feels doesn't feel like a new identity but one that's evolved and holding onto the past and smartly channeling it into the days ahead. I mean, if it ain't broke, what's there to fix?