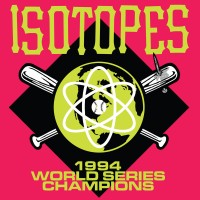 Isotopes are back with their latest offering, the LP 1994 World Series Champions. For those unfamiliar, Isotopes are aptly-named for the baseball team from The Simpsons, and draw heavily on this cartoonish-baseball vibe. And when I say they draw heavily, it’s legitimately their all-encompassing shtick. And that’s fine. They funnel this novelty through a sound dripping with Ramones, Screeching Weasel, or even the more modern Teenage Bottlerocket. But maybe unlike those bands and their records, 1994 World Series Champions is exclusively for the utterly light-hearted happy-go-lucky punk listener.

The sound throughout is consistent and polished, and the recording is slickly produced. But this is actually a detracting measure. With an already bubble-gum feeling surrounding the band, the recording choices could’ve been an opportunity for Isotopes to up their grittiness. The vocals are so slickly doubled-over that they almost fall into the background of the recording. The vocal melodies make sense but, with little range, they don’t do anything surprising or interesting. In fact, Isotopes don’t offer anything you couldn’t hear coming from bleachers away. Similarly the rhythm section does little to stand out from the crowd. Instead, the bass and drums offer next to no build-ups or driving patterns that could give the sound something more than just keeping the beat. The guitar leads are far and away the best musical aspect Isotopes offer on the record. The leads are consistently impressive, nicely layered, and give the songs more zing.

The record’s strongest song, “Morganna,” offers a darker atmosphere than most others on the record. The driving guitars definitely keep the Ramones influence clearly at the forefront, but there’s a choppier lead that breaks through and builds a more diverse sound in the track. Now the hook and chorus are catchy, but that’s nothing new or adventurous for Isotopes. The cleverest aspect is actually in the song’s topic. It’s about Morganna “The Wild One,” a curvaceous blonde fan who would run onto baseball fields in the 1970s to kiss players.

1994 World Series Champions is quite transparently a fun partying pop punk record from a band who embraces all of those ideas. If the record is anything, it’s an homage to a group of people who absolutely love baseball and getting wild (but so are all of their releases). Their references are legitimately impressive. From the aforementioned “Morganna,” to “Rule 21” about Pete Rose’s gambling scandals, and to “Sandlot Party” at once a nice allusion to the movie and to the band’s penchant for revelry, Isotopes keep it really real with their novelty. And that’s not to gloss over the record’s title, itself a reference to the doomed 1994 season in which there was no World Series champion.

At this point, the big drawback for Isotopes, and for 1994 World Series Champions as a record, is the shtick itself. How many songs about baseball can one listen to? To boot, there is little evolution musically for the band. The songwriting from track to track is consistently the same. No experimentation, no stretching the sound, none of it. If you’re going to offer novelty and shtick, you need to offer something more to keep the listener intrigued. This record simply does not do that. It’s got solid production. The songs are polished and written with purpose. The band has their look and their shtick. But none of it adds up to all that much. To borrow from the hook to the record’s opening track, “what [they] do ain’t secret.” And that might just be the biggest problem.