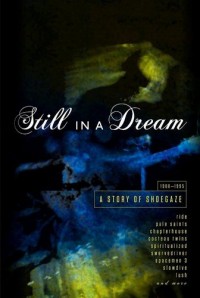 Still in a Dream: A Story of Shoegaze 1988-1995 is perhaps the best compilation of one niche genre I have ever had the pleasure of listening to.

To say this is a simple overview is grossly underrepresenting the wealth of artifacts contained in this 5-disc set. And here I thought I was a Shoegaze addict! Nope! Someone, or maybe several others, came together, ploughed through the trenches, and unearthed just about every.single.Shoegaze.band.ever!

The time line of 1988 through 1995 cannot be more accurate. Those were the golden years of the “scene that celebrates itself”, and with all the artists contained here, you are getting a glimpse of just about everything that the genre had to show. These are all the bands that helped shape that certain sound, style, and meaning.

Really, I’m flabbergasted at who they got to be on this comp. You have the usual groups like Lush, Slowdive, Ride, The Jesus and Mary Chain, Galaxy 500, and Chapterhouse, but in addition to those, you have a wide spectrum of bands like American acts Lilys, Drop Nineteens, Lovesliescrushing, Velocity Girl, and I cannot believe it, but also Majesty Crush! On the other side of the world there is Coaltar of the Deepers from Japan, Bailter Space from New Zealand, as well as An April March from Ontario and Rollerskate Skinny from Dublin. Those are just a sampling of the many artists contained in this box set and plenty more are left to chew on.

On to the nitty gritty part of this review, I should go ahead and fault it just a bit for some choices of added artists like The Flaming Lips and maybe Seefeel. I can forgive Seefeel though because they are amazing and their blending of electronic noise with atmospheric soundscapes works well with everything else here. The Flaming Lips though have never really been a Shoegaze band. Their Psychedelic style I guess can sometimes blur the lines between the genres, and other acts like Loop, Spacemen 3, and Bardo Pond have done that same thing as well. Still, if you are going to go and add an act like the Flaming Lips you might as well go all out and add acts like Sonic Youth, Smashing Pumpkins and The Stone Roses and then pic the shoegaziest track in their catalogues for additional fringe artists.

Another complaint is they maybe could have had one more disc that contained contemporary acts from the genre revival that came about from the 2000’s Indie scene. That would have been a nice treat to show how far Shoegaze has come. I have become accustomed to blending acts like Asobi Seksu, The Pains of Being Pure at Heart, Beach House, The Bilinda Butchers, Lemon’s Chair, The Radio Dept., M83, Panda Riot, and A Place to Bury Strangers into my Shoegaze mix.

To nerd out just a bit more here, I will say they missed just a “few” bands that I usually associate with the genre from back then. There is a lack of The Charlatans UK, Pink Noise Test, The Emerald Down, Difference Engine, The 360’s, Orange, Trespassers William, Grabbel and the Final Cut, Duster, and The Verve. Yes, the Verve! If you have never listened to their debut album A Storm in Heaven, you are absolutely missing out on one of the most amazing Psychedelic/Shoegaze records of all time.

Oh, and they forgot to get My Bloody Valentine on this thing. What the heck? I am guessing it has something to do with rights, or maybe the band just not wanting to allow themselves to be lumped in with this “scene”. Whatever… If you do not know MBV by this point, you perhaps need to read more.

I appreciate the work that went into this collection. Being able to hear a track by The Boo Radley’s, then hear something by Curve, then shuffle around and jam Swirlies, Flying Saucer Attack, Moose, Th' Faith Healers, Spirea X, and Ultra Vivid Scene is fantastic.

Cherry Red records went out of their way to get this compilation made without anyone asking for it. It is the perfect package to introduce anyone into the genre. It is a textbook, Shoegaze 101 sort of thing. If you are even slightly interested in Shoegaze then give this a look over and go check out some of the songs here. I massively dig this and do not care about name-dropping ALL THE BANDS!

Man, I wish I had this back in college…

All Bad: No Good