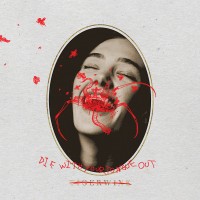 Colorado's Tigerwine have an interesting way of meshing together post-hardcore and grunge, and their sound doesn't feel like something heard often. I dug back into their Lull EP to get a better understanding of who they were, and where they're at now in their musical journey and safe to say, they sound more assured and complete. Die With Your Tongue Out harnesses this and takes you down the rabbit hole for a gloomy ride that's self-reflective and one which displays an outward anger to life.

The album was recorded with Matt Goldman (Underoath, Anberlin, Copeland) and you feel how heavy his signature can be at quite a few junctures. However, Tigerwine use these weights subtly and don't allow the sound to drown you out. "Sign" is one of the more hardcore-influenced gems with "110" done a la Circa Survive. When it comes to that grunged-out, dark and ominous melding of sounds mentioned above, "High Roof" and "Sharp Elbows Pt. 2" are what you want to sample. The best track though comes in the form of "Nosebleed"-- which feels like Silversun Pickups took a hard grunge turn a la Daisyhead or Balance and Composure. A few of the tracks early on lose steam as they feel like they want to be more hardcore than anything else, but these end up getting lost in the muddle. That aside, it's a solid record.

All Bad: No Good