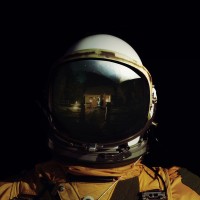 You probably won't hide your feelings about Falling in Reverse. However, Epitaph knows that at the end of the day, it has a business to run and more power to them. First off, let me say that this album surprised me musically. There are a couple songs that instrumentally impress and actually would be pretty decent if not for singer, Ronnie Radke's lyrics. They're as creepy as it gets and given the lyrical content on tap here (and you really need to see the fucking titles of these songs), the band should be re-branded as petty-core. Coming Home scrubs away the band's aggression and tries to get more emotional, but all it does is end up sounding like that perv you'd never leave a drunk friend around.

Hats off to the first three songs on the record though. Catchy and melodic a la 30 Seconds To Mars. "Coming Home", "Broken" and "Loser" paint three very angsty narratives but are cool space-rock songs. After that, things fall downhill so fast. Cringeworthy lyrics start swarming and mid-record, let me just put it this way -- "Fuck You And All Your Friends", "I Hate Everyone" and "I'm Bad At Life". Need I say more? If there's anything that tanks more than Radke's songwriting ability, it's his titling. I honestly didn't think the lyrics could get creepier than their last album but here, it feels stalker-ish, or like the shit you'd find scribbled on high school desks. And even in the comments sections on the internet.

"I Hate Everyone" does pique interest a bit though as it has an acoustic layer to it, gets power-riffy and then tries to rip off an Offspring chorus here and there. At least it tries, but shoutalong choruses can't hide what the fuck's going on in terms of no imagination. The highlight of the album is saved for last in a track that Silversun Pickups should be suing for. "The Departure" is aptly titled as FIR find themselves departing from originality. It's a rip-off of SSPU's "Panic Switch" and legal or not, it sums up what I hoped I wouldn't find in this record. Another unambitious, uninspiring and feeble attempt at being a bro, but still wanting people to feel sorry for you, especially girls so that you can capitalize by passing off perversions as poetry.

Iggy and the Stooges: Raw Power