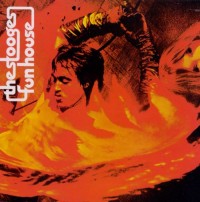 I was living in San Francisco, 19 years old with little to no clue about how to get a summer job after getting fired, living on zip in terms of money. After getting utterly high at night I'd walk to the 7-Eleven for munchies and those seven blocks would be soundtracked by “Dirt” by the Stooges. I was pissed, sexually frustrated, and a bit spoiled lets face it, and as I walked in those brooding Inner Richmond streets “Dirt” was my song, a churning, droning inferno (like that album cover) of impotence and scummy pride. I was Dirt and proud like Iggy was – I knew I didn't belong, and while I'm a different guy now (even if I'm still kind of a fuckup) that sense of outsiderdom, of a wild darkness is still there.

That madness, that cruel, lo-fi energy that I caught onto as a teen is still there in Funhouse – the demented yowling, squealing and thundering of “TV Eye”, where Iggy Pop opens the song with an obscene shout of “LOVEEEEEEEEEEEEEEEEEEEEE” before descending into commands, barks and screams that can be wordless or only barely resemble English. Funhouse is the processing of free jazz, garage rock, heavy R B and live Detroit blues into its own form, a primordial soup of enormous guitar lunkhead genius and raving drugged out malice. It's only a fun album in the title – this is hell, glorious hell, especially compared to the first album where Pop and Asheton are still chained to sanity by John Cale's solid, stable production and avant garde touches. Here the dogs are utterly unleashed – and given a sax to play with.

Funhouse is the closest we'll get in the studio to the Stooges' live sound and thats what makes it arguably their best overall album – here is a band allowed to go completely mad, the music of people rioting and chugging beer and copulating in the streets all at the same time. The pulsing, chug-a-lug openers “Down In The Street” and “Loose” are the closest they get to straight ahead coherence, and it's still Iggy bouncing, moaning “And I'll stick it – deep inside” like you know exactly what that means and you love it. And from there the album wildly careens from violent punk into repetitious, thrumming drone guitar techniques and saxophone from the great late Steve MacKay on “Funhouse” among others (his entrance on the ecstatic “1970”, as if saluting Iggy Pop's hideous joy, is amazing). The climax is thus of course downright harrowing - “L.A. Blues”, a bloody, five minute pummeling of inhumanity and mayhem. It is The Stooges totally disposing of the burdens of structure, only governed by the shrieks of their lead singer, now a banshee from the devils shape shifting at will as the drums of Scott Asheton pound and pound into a pulp. We are only shown mercy when Iggy at last collapses, sounding like a wild animal ready for sleep, as we'd be if we weren't so goddamn excited.

I'm almost 25 as I write this but here I am, listening to the Stooges like I did when I was 17 not only because I'm writing about it but because at a certain level some things just don't change, as they don't for plenty of weird punk kids who needed Funhouse as badly as I did. You're a little calmer, a little more understanding maybe – hell you can pay your taxes. But you've still got that excitement in you, that capacity for darkness and loserdom that only you and select others can understand. And for that, for that well you've got Iggy who tells you its okay, he's got that in him too as he screams, the sound captured on tape for all time for your pleasure.