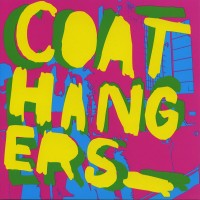 The Coathangers’ first release, The Coathangers, is probably one of the best prototypes you can give to southern punk. Originally from Atlanta, Georgia, this album was their first full length and was released in 2007. Their sound wavers between surf punk, riot grrrl, and hardcore. The band’s made up of three kick-ass women that pretty fluidly trade off vocals and instruments –most predominantly drums, guitar, bass, with notable features from the keyboard and in some cases a squeaky toy. Their songs often explore ideas of women’s stereotypes and relationships with antagonistic boys.

This album in particular checks off every desired punk rock album dimension in the freshest way. From yell along tracks like “Shut the Fuck Up” to the sound sample tracks of old exercise records. The vocals have a gritty and undeniably feminine quality to them with plenty of reverb and screeching squeals. The tracks show a diverse range of sounds and styles, yet the album remains cohesive through the set list.

As opposed to some of their later albums (such as Suck my Shirt or Nosebleed Weekend), this album stands out as more playful and mocking in the content and style of songs. Most exemplary of this may be the track “Parcheesi” which is a pop tune that’s about 90% comprised of puns on getting played like a board game. A close second would be “Buckhead Betty” which has a simpler, stripped down sound about one of those housewives addicted to painkillers and long island ice teas. To be noted, playful and mocking content isn’t to be conflated with a lack of hardcore rage. Best shown in the track “Don’t Touch my Shit” (my personal favorite track), which features driving drum beats, a relentless ringing phone sample, and absolutely screeching vocals about girls fucking around with your boyfriend.

This album is so fantastic because it’s the trifecta of an all-girl band, singing about women, and seriously rocking. This is the kind of band that is doing a lot for women in rock without ever having to explicitly point out their role in the scene. Everything The Coathangers do I’m likely to love, but this album has a soft spot in my heart as my first crash course in them. Listening through the tracks gives you that subtle feeling of relating on the female human condition and positively raging about it.