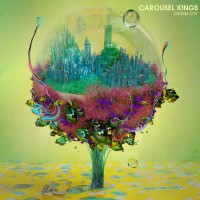 I am going to just get this off of my chest up front; Carousel Kings are an easy band to make fun of, whether it be the name of the band or the genre itself. Any grown man that has anything to do with a carnival carousel besides helping his young child get on and off of one seems a little bit suspect to me, but I always got nauseous on rides that went around in a circle. Before I had heard Charm City, which is the most recent Carousel Kings offering; the image of generic, non-descript pop punk about pizza and house parties immediately filled my mind. As much as I may enjoy pizza, that particular aspect of contemporary pop punk does not quite twirl my propeller-beanie the way it used to when I was significantly younger. While Charm City is most definitely not breaking out of the Warped tour/scene kid/mallrat box, I think it does deserve a little bit of credit.

Charm City definitely is a mainstream pop-punk record; there is absolutely no disputing it. That being said, the band has done an admirable job of actually putting together well-written songs. This is not factory formed, overly processed pop punk with one liner choruses that a lot of bands try to pass off as “punk”. While I am sure the band can still get away with some sassy finger waving on stage, it is apparent that the members can competently play their instruments. Solid drumming and some impressive guitar leads and solos that are peppered throughout the record evidence the proficient musicianship.

As difficult as it is for a grown man to wade into this genre, a few aspects of this band caught my attention. Straight up, the band has tapped into a nostalgia factor for me; it is easy to pick out elements of bands that range from The Used, to New Found Glory, and Fall Out Boy, something about Charm City just feels like the year 2000. While Carousel Kings may not become the next New Found Glory, there are catchy choruses on Charm City that I can’t deny. Another strong point for this band is that their vocalist can successfully refrain from the overly high-pitched and heavily auto-tuned wailing that a lot of this style of music utilizes. The band pulls things together in an organic way, and despite creating diabetes-inducing choruses, the band comes off as real and not manufactured in the studio, which is pleasantly refreshing.

The record is a bit too long, but there are some stand out tracks that help Carousel Kings to break away from the pack of forgettable nonsense that seems to be filling the stages at Warped tour these days. Songs like “Grey Goose”, “Something isn’t Right” and "You Never Will" are examples of this. The band still manages to fit in some fast punk beats, which is always a solid aspect for pop oriented punk bands.

Carousel Kings pull off this genre better than a lot of bigger bands that have been at this a lot longer. For a band playing a genre that is a bit of a target for criticism in and of itself, these guys seem to be able to hold their own.