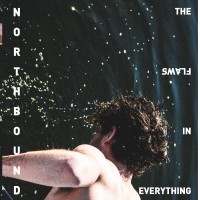 Northbound have a well-worn sound, one that isn't anything groundbreaking, but which stands out among peers. It reconnects with bands like Sainthood Reps or at present, Daisyhead, Head North and Tigerwine. The new EP, Flaws In Everything, is a more aggressive take on pop-punk or even indie (which they hammered away at on Death of a Slug), making sure that you take note of what's to come.

The last album felt influenced by bands like The Wonder Years and Modern Baseball. Songs like "Fade to Black" and "Suitor Type" do the same, with a contemporary leaning on Somos and Runaway Brother too. Tinges of the emo revival but not that dour or cynical. It's just five tracks but a pretty great snapshot of diversity. "Tell Me Something Good" rings out like old-school Citizen and Balance and Composure as well; bands who dug away at that thick, feisty style of emo-grunge. When it's all said and done, Northbound chip away at an identity that may sound like a couple familiar faces, but you can tell with refining and time they'll be a sound of their own. When vocalist, Jonathan Frase, takes an acoustic stab at "Lonely Squid" you can tell how many stories he in particular has to offer.