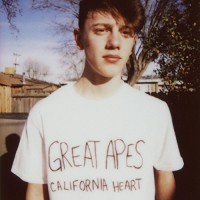 Brian Moss' drive through Great Apes has provided some of the best punk rock that for some reason still comes off as undiscovered. Thread is the album I'd usually direct people to, but what transpires on California Heart is nothing short of magical and it ends up usurping everything that came before. Moss details the struggles of life in San Francisco, the ups and downs from relationships to the music scene to the emotional turmoil that lays waste to sunny days, all set to a backdrop of rollicking shoutalong punk anthems.

This album never sticks to one sound and it's how they vary things up that makes Great Apes such a powerhouse. They move in and out of genres so seamlessly. Punk fluidity at its best. Songs like "Brown Dots", "Regarding the You in Me" and "Prom Com" are aggressive bangers fit for fans of Jawbreaker; melodic yet not in a slow sense at all as say, "The Escapist" and "The Last Days of Tranquility". These two are a tad more conventional and poppier, coming off like a mix between Desaparecidos and Banquets.

Now, it isn't just the delightful musical inconsistency at hand that makes all this magic but it's the lyrics as well. They're personal, deep and actually paint what a depressed yet optimistic music-maker feels when he wants to leave home for bigger things. One of the standout tracks that reeks of this self-introspection is "Chukchansi’s Complacency for Beginners" which emerges like a Pearl Jam slow-burner from the 90s. It hits the brakes and lets the weight of the world sink down on you, reminding you to take the hit and then get up again. And as Moss says, do so with a California Heart of resiliency while raising your voice, as only punk rock lets you.