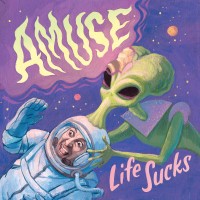 *For the sake of total disclosure, long time Punknews staffer, podcast producer and my friend Greg Simpson did some post production work on this EP. While I don’t think that has any bearing on my ability to review it fairly, that is how the band first came to my attention.

Amuse is a pop-punk trio from Indianapolis, which also happens to be the home of the greatest pop-punk band of all time. (Sloppy Seconds duh!) This was my first time hearing Amuse, and I naturally assumed they were a newer, younger band. A quick listen to Life Sucks seemed to confirm this. I was shocked to learn that they’ve been around since 2001. I suppose the high quality of their material is a testament to how they’ve been doing this. They’ve actually been playing for longer than a lot of the bands I would compare them to. Teenage Bottlerocket, Masked Intruder and the 90’s Lookout! stuff would be good starting points.

Life Sucks was recorded at the legendary Sonic Iguana in Lafayette, IN, and produced by the equally legendary Mass Giorgini. That place has an amazing pop-punk pedigree, and some of my very favorite records of that genre (Screeching Weasel and The Queers just to name a couple) were recorded there. Life Sucks sounds great and is very polished. The production is slick with lots of harmony backing vocals and melodic guitar leads. I keep thinking of Masked Intruder without the gimmick or any of the doo wop. I might have preferred it a little rougher around the edges, but you know I’m a quarrelsome old bastard.

“Offend Me” and “F.U.Y.” (fucked up youth) start things off and are a couple of songs about growing up and learning painful lessons. The title track comes to grip with failure and “Toxic” is a classic breakup song. Things get into nerdy Lillingtons territory starting with “Tarkin”. At first it just seems like an angry love song. Repeated listens reveal that it is in fact an angry love song, but it’s directed toward a dog. Closer “I Want To Believe (In Me & You)” is a is an unrequited love song directed toward Agent Scully. Any X-Files reference is a bonus for me, and it’s a standout. Every track on Life Sucks is an earworm, and Amuse has delivered a solid EP from front to back.