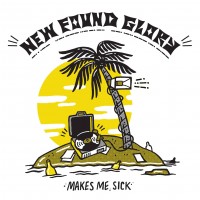 The last New Found Glory record surprised me. My expectations weren't that high and I enjoyed most of it. Now, this is a band I listened to a lot in high school and one I'll always give a fair shot; and the benefit of the doubt. Sadly, as much as Resurrection tried to bring them back a couple years ago, Makes Me Sick is an aptly-titled album that tries to kill their movement.

Simple Plan, Bouncing Souls and Bayside are bands I thought would have tanked on their last couple records and they didn't. They still felt fresh and convincing. Imaginative too. The reason I'm lumping NFG in here is that I consider these some of the old-school bands from my youth and ones who I'd desperately love to still see succeed. All NFG do here though is remind Kevin Lyman to leave a light on for them. "Party On Apocalypse" emphasizes this statement in droves. It's tailor-made for that audience and personally, it would have been cool 17 years ago. This song isn't even throwback but it shows a lack of evolution and creativity. Most of the album is like this and doesn't even take a risk. There are some sections with organs and keys a la "The Cheapest Thrill" which feel a bit like Say Anything, but other than that it's fucking mindblowing how adults can make such music. The lyrics are cheesy and uninspiring at best.

I came looking for songs like "All Downhill From Here" and for the band to cut loose like Hopeless allowed say, The Wonder Years to. Instead I get "The Sound of Two Voices" with a Caribbean melody? 10 for idea, 0 for execution. It sounds like that scene from "The Social Network" when Zuckberg tries to convince the artist formerly known as Spider-Man to invest in his scheme. That said, simple, bouncy pop-punk melodies can and do work. Shame that they weren't found much here. "Barbed Wire", "Say It, Don't Spray It" and "Happy Being Miserable" aren't bad at all, as well as "Short But Sweet" which tries to rollick like the new Taking Sunday direction. But all they end up being are spines of things that had potential. NFG will still be in my car deck and still in my heart but I'll be damned... Fall Out Boy tried to save rock and roll, but here, NFG attempts to put 10 missiles in the ship and sink it.