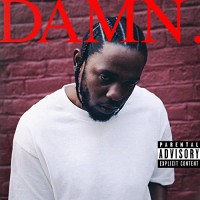 Kendrick Lamar’s To Pimp a Butterfly was a huge, lush, intricate production with a smooth funk feel that told a story about Lamar’s relationship with fame and fortune. Following the groundbreaking success of the album, including being one of the first three albums to be chosen in a new Harvard project to archive the 200 best hip-hop albums of all time, what does Kendrick Lamar follow it with? An album that goes out of its way to try to be a very different album than Butterfly.

I’ve been listening to DAMN. for about two weeks now, and it’s taken me a long time to figure out if I like this album or not. At first, I was put off by the fact that everything about DAMN. seems to be much more straight forward than Butterfly. Even start with the album cover. The cover of Butterfly and even the title To Pimp a Butterfly drip with poetic style. DAMN. on the other hand, is a simple, one word title, stylized in all caps with a period at the end to give a sense of finality and decisiveness. It appears on the front cover on the album in big, harsh red letters over a close up picture of Lamar in a white t-shirt against a red wall, taken at a weirdly uncomfortable angle. The tracks titles take on the same stylization as the album title: they’re all single words, written in all capitals, with a period at the end. So even from just looking at the cover and track listing of the album, everything about DAMN. is intentionally harsh and jarring, where To Pimp a Butterfly was smooth and funky.

DAMN. also isn’t a concept album the way Butterfly was; it’s 14 songs that are linked by common threads, but don’t tell a story. That doesn’t mean that the album isn’t as dense and complex as To Pimp a Butterfly, it just does things differently. Where Butterfly sometimes stretched the line between rap and poetry, with everything flowing together in an incredibly complex but smooth path, DAMN. is all about musical and lyrical anarchy. The album lurches into sudden stops and sudden loud noises. While there are a good number of mellower songs, they tend to end abruptly as the album launches into a much louder, more jarring song with little or no transition. Lamar takes the traditional verse/chorus structure and breaks it down into pieces to put it back together in whatever shape he wants.

Take “DNA.”, which has already blown up because of the music video for the song featuring Don Cheadle. The song begins with a clip of Fox News correspondents criticizing Lamar for a lyric in “Alright” from To Pimp a Butterfly: “And we hate the po-po/Wanna kill us dead in the street fo sho’.” The song begins aggressively, but then halfway through the song, we return to the same Fox News segment in which Geraldo Rivera says, in the midst of a cacophony of lyrics and noise, “This is why I say that hip-hop has done more damage to young African-Americans than racism in recent years.” In light of that profoundly stupid statement, the song suddenly changes everything from its rhythm to its musical style to the tone of Lamar’s raps, which suddenly gets angrier. His ire towards Rivera continues to spill over into the next track on the album, “YAH.”

“FEAR.” can be a really off-putting track if, like me, you’re not very religious, or if you naturally have a distrust of fringe religions. The track does a great job of exploring the concept of fear, expressing the different fears Lamar had at ages seven, 17, and 27. But the track is bookended by an answering machine message from Kendrick’s cousin, Carl Duckworth, espousing the doctrines of a little known religion known as the Hebrew Israelites or Black Hebrew Israelites. From my own Internet research, my best understanding is that the Hebrew Israelites believe that African-Americans (and according to Carl Duckworth’s message on the track, Latinos and Native Americans, but I don’t see that part mentioned anywhere else) are the true descendants of the 12 tribes of Israel. They seem to combine Christian and Jewish traditions into their own.

I think we have a knee-jerk reaction to distrust religions we’ve never heard of due to our experience as a culture with dangerous cults and esoteric religions. From what I’ve read about the Hebrew Israelites, the Southern Poverty Law Center has identified factions in the group as endorsing black supremacy and antisemitism, but that the group as a whole is not neccessarily guilty of these practices.

If you listen closely throughout the album, there are references to the Hebrew Israelites’ beliefs scattered throughout the album. If you’re worried about him espousing a dangerous cult, rest assured that that doesn’t seem to be what’s going on here. If you’re largely anti-religion, like myself, feel free to roll your eyes when those references come up throughout the album. Either way, don’t let those misgivings keep you away from this phenomenal, dense, intricate album that only gets better on multiple listens. In fact, if anything about this album is off-putting on firsts listen,, listen to it a few more times because it really needs to be unpacked and digested. DAMN. isn’t the same kind of masterpiece that To Pimp a Butterfly is, but it’s a masterpiece nonetheless.