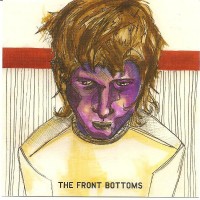 It blew my mind we had the other two albums from The Front Bottoms reviewed but not the one that started it all. The Front Bottoms burst onto the scene with a warm DIY brand of indie rock that was steeped mostly in folk, painting emotive coming-of-age stories through Brian Sella's vocals and struggles with life and love. You can tell looking back how young and immature he was but that's what made them click. They were young, restless and free to fuck up, which is why a quote from a Ben Kingsley movie seemed fitting for the band's name.

The Front Bottoms feels like an album dedicated to Ramshackle Glory. Sella himself has a twang in his voice a la Tom DeLonge to add to the quirky and cute factor. However, when it comes to slow acoustic burns like "Swimming Pool" things get very relatable and very real. This is one of the few songs that stray off their early formulas -- fizzy, upbeat, indie-pop gems like "Flashlight", "Maps" and "The Beers." Listening to Bryan Uyicich on the keys here makes me miss him more but you get enough of his brother, Matt, who just pounds away frenetically on the kit and is one of the major reasons I got into them.

Subtle trumpets here and there spice things up even more and by the time the record ends, you'll find that there wasn't much diversity in the manner they make music. But despite that, almost every track was worth being released as a single. This record holds up as one of my faves to this very day and I wouldn't even call it a guilty pleasure. It's fucking emo-indie-folk that I'm not sure they'll be able to put out on Fueled By Ramen.