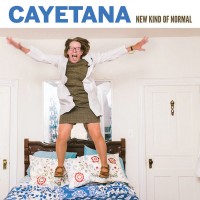 Cayetana’s 2014 debut album, Nervous Like Me was easily one of the top five best debut albums I’ve heard in the last decade. The album straddled the line between punk and indie and was a testament to the delicate, beautiful music you can actually create within the genre of punk. It was 11 tracks of jangly, barely distorted guitars and haunting melodies that created some of the most beautiful sounds I’ve ever heard in punk. If you heard “Mesa,” their first single from their follow-up album, New Kind of Normal, or “Trails,” the song that appeared on Cayetana’s split with Camp Cope but doesn’t appear on Normal, you’d probably feel pretty safe in assuming that Cayetana hasn’t changed their sound much since Nervous Like Me. And that’s the greatest trick that Cayetana ever played on us, because New Kind of Normal is anything but a rehash of its predecessor.

New Kind of Normal still fits the description I gave earlier—straddles the line between punk and indie, haunting melodies, all that jazz—but it takes that style in directions that Nervous Like Me never did. Where Nervous kept to a formula of similar chords and rhythms, New Kind of Normal plays around with tempo, tone, even genre. Cayetana prides themselves by labeling themselves as a punk band, but on this album they’re really stretching that categorization. The opening track, “Am I Dead Yet?,” plays around in the instrumental parts with the rhythm section playing a ska beat, and the guitar refusing to pay anything resembling ska. “Bus Ticket” is a vintage 90’s grunge tune (well, early post-grunge, anyway). Several songs, especially “Follow” and “World” (the latter of which is the one song on the album written by bassist Allegra Anka) feature gothic post-punk basslines.

Lyrically, the album focuses on lyrics about feeling lost, alone, and trying to figure out your life. “Side Sleepers,” a song that’s slower and more mellow than anything on Nervous, has a chorus that could be ripped from my own life: “You should get your shit together/You could be so much better.” But that’s not as heartbreaking as the emo-tinged “Easy to Love” which uses some very simple lyrics to deliver a harsh blow to the heart: “Maybe you will find someone easier to love.” It’s such a simple sentence, but it speaks volumes of heartbreak and longing. “Certain for Miles” speaks of the envy of other people around you seeming to have figured out their lives while you’re still trying to figure yours out. A poignant message from this band of ladies who I presume are in their 20’s. A bit of twist of the knife for this girl in her early 30’s.

To top it all of, Cayetana abandoned a record label this time around in favor of starting their own, Plum Records, and releasing through that. So far, New Kind of Normal is the only release from Plum Records, and time will tell if there will be any future releases on the label. But it just goes to show that Cayetana are becoming more savvy about their place in the music industry while simultaneously branching out in their sound. Avoiding the sophomore slump entirely, New Kind of Normal is a huge improvement from Nervous Like Me, but one that honestly sounds like the next logical step in their development. New Kind of Normal is an album that had to prove that Cayetana wasn’t a one trick pony and that they had the creativity to move forward, and they proved both definitively, showing that they are definitely a band that’s got even more to show us down the road.

At The Drive-In: in•ter a•li•a