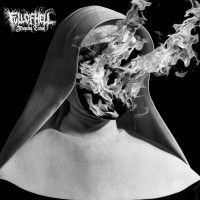 Trumpeting Ecstasy is the most recent Full of Hell release, and it is the first proper full-length release with label Profound Lore Records. Trumpeting Ecstasy will please the bands existing fan base and it will likely draw in more listeners from the metal and grindcore community. While Full of Hell slowly shed some of their hardcore and dbeat influences with each successive release, those roots still ring true with the increased extreme metal edge found on Trumpeting Ecstasy.

Full of Hell are not a band for the faint of heart, they are fast, heavily distorted, and feature raw and ugly screaming, and Trumpeting Ecstasy is no different in that department. The band still features an odd groove or ambient electronic interlude here and there, but the majority of this record is fast blast beat driven grindcore. The production value is on point, and is easily the most impressive recording Full of Hell has done to date. With Kurt Ballou of God City Studio handling the production, the bands strengths and dynamics are highlighted very well here, none of the instrumentation gets lost in the mix. I can’t say enough about how great and dirty the bass tone on this record is, it cuts almost like a second guitar.

Like Full of Hell records of the past, the musicianship is stellar; these guys rip on their respective instruments. The drumming is cranked to 10 the entire album, and all of the intricate guitar work and leads that have at times been lost in muddier past recordings, are all brought to life with Trumpeting Ecstasy. Full of Hell has succeeded in creating a wall of heavy distortion and lightening fast drums. The band has included a few songs that shift gears with some added groove and guest vocalists including “Crawling Back to God” and “At The Cauldron’s Bottom” which also happen to be two of the strongest tracks on the record.

Full of Hell are not a band for everyone, some people will immediately be turned off by the extreme nature of this record, but for what it is, the band has done a great job. Full of Hell are not really pulling any new punches with this record, but they have done a great job in writing a cohesive and flowing extreme metal record. The album does not drag or feel too long, as many of the tracks are quite short, that being said, the short tracks work to propel the longer songs and add to the overall flow of the album. It is evident that a lot of thought has gone into the track listing and the way the album has been put together, and I think that is admirable and worth noting.

If you are in the mood for some heavily distorted and raging grind, Trumpeting Ecstasy is a great place to start. I think Full of Hell have done a great job of pulling together their past hard work and influences and put together a solid and well-done record. While it may not be for everyone, it is a quality release for the genre.