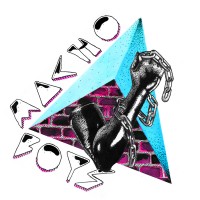 From the start this album is almost completely 80s punk rock in both style and presentation. The cover itself is a delight, with hot pinks and cyan blues. The only two aspects that work against this illusion is the track dedicated to “Stone Cold” Steve Austin, and the overall modern progressive theme of the lyrics. While social progressiveness was present a lot in the 80s, it is obvious that there is a much more modern tone here. These are not to the albums detriment, but serve to establish it as a contemporary album.


However, Macho Boys dedication to the genre is a blessing and a curse. The songs are likely to please anyone who likes the 80s hardcore punk style, but most definitely would not be in anyway an entry point for someone who isn’t already a fan of it. I enjoy this type of music, so I found it pleasant and refreshing to hear- a band creating music that my 10-year-old self would’ve gone ape over.

That being said Macho Boys definitely do not break any moulds or new ground here. There isn’t much that sticks out to the listener. Certain songs such as “Papa Don’t Preach Part Two” and the final track “Slam” are exciting, although for separate reasons. The first because it is a modern, empowering take on the classic Madonna song; and the second because it will remind anyone who survived a classic circle pit (the kind we don’t get to see anymore) of what it was truly like. It surely pulled up memories for me of old time garage shows, especially the one when I rode on my friend Adam’s shoulders (he was tall and strong, I was skinny and light) and I hit my head on the garage door opener. Good times. It is wonderful that this band’s music can evoke those types of memories so well.

The aforementioned “Stone Cold” kind of doesn’t seem to fit in with the rest of the album. In some ways funny due to the lyrics, but obviously an indictment of his actions, persona, and personality; it still works the impression or feeling that you are listening to an early 80s album as it’s a bit anachronistic (Stone Cold’s career started in 1989, but he didn’t really cement his stage persona until later). Once again not a bad song, but still slightly out of place.

Overall this is an enjoyable album for fans of the style. There is some great moments but overall nothing to write home about. In fact the most damning thing I can say about the album is that when it was finished and my player cycled back around to the first song I didn’t notice until the third or fourth track that I had already heard these before. When songs start to sound the same like that, the repetitiveness begins to drag on the album.

I would recommend giving it a listen via the group’s Bandcamp page to see if you like it before buying. This album gets an above average score, but only slightly.