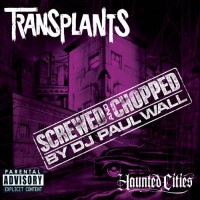 Haunted Cities is without question my least preferred release by the hardcore punk meets hip-hop supergroup known as the Transplants. When I saw a copy of the remixed version of the album, Haunted Cities: Screwed & Chopped by DJ Paul Wall, on Amazon for a whopping TWO dollars, I immediately added it to my cart with an understanding that it will be more of a funny trinket in my music collection than something I’d listen to on a regular basis.

Chopped and screwed is a technique used in hip-hop remixes that slows down the tempo of a song and adds in scratching, skipping beats and stop-time effects. It originated in Houston during the early 1990’s where it was introduced by DJ Screw, who later died from a lethal combination of codeine and alcohol in 2000. Purple drank, a cough-syrup based beverage that contains codeine and promethazine, is often connected to the genre as it is supposed to musically resemble the effect of slowing the brain down.

Slow is the dominant theme of this remixed album. Everything is slowed down; Skinhead Rob’s trademark shout sounds like the voice of Satan from the cartoon South Park and Tim Armstrong’s rapping ends up resembling the voice of Grover from Sesame Street, if he was underwater. And why would anyone want to listen to a slowed down version of Travis Barker’s drums? They wouldn’t. The scratching and stop-time effects just make it sound like the disc might be skipping every 15-seconds or so. Basically, nothing else unique or notable takes places for the entire duration of play. If you played a single of “Gangsters & Thugs” at 33-rpm instead of 45-rpm and sporadically moved the needle around every so often then you’d achieve the same result.

Without a doubt, this release represents a band doing exactly what they want to and almost acting on a dare to try something unheard of in punk rock. While it’s a great example of artists truly being artists, what came out of this experiment didn’t fall flat, it plummeted to the depths of creation. Unless you can pull some humor out of Skinhead Rob and crew reppin’ the purple drank then stay clear of this release. Even for the most diehard Transplants fans: if you decide to buy a copy then make sure it’s only a couple of bucks – i.e. two.