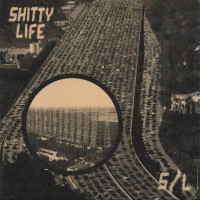 Shitty Life is an Italian five piece of screaming, speedball rock and roll. Fun and throaty, refusing to slow down at any given moment, S/L is 7 and a half minutes of raucous punk bliss. For modern comparisons, it kind of sounds like Touche Amore’s Jeremy Bolm took over vocal roles for Single Mothers. Later Suicide Machines meets later The Unseen. Shitty Life falls somewhere in between these fist clenching, pharynx scratched cracks.

A lo-fi, gravely road torn apart by a steady riffing romp, packed with plenty of bouncy bass, “Isolated Youth” is a perfect introduction to those unfamiliar with these Parma punks. With heavy emphasis on crowd-amping vocal patterning, the instrumentals are allowed to shine and direct where the songs go together, not a jumbled, backseat driving mess that can tend to happen when bands are this loud. Everyone plays together nicely, even on the instrumental “On the Table,” there is plenty of dancing rhythm that remains as satisfactory as any other track where vocals are tearing at your face.

Whether it’s the hand-blistering drumming and roaring on “Not Like You,” or the screamy, rocking “Living in a Trap,” a personal favorite, something will always grab your attention. Shitty Life’s S/L is the punk release you need in your (hopefully less shitty) life, and deserves EP of the year discussion.

Have Mercy: Make The Best Of It