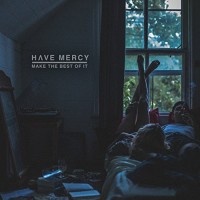 Have Mercy are one of those bands I thought would be bigger by now. They had that mid-tempo alt.rock vibe but with grungy, mainstream tones that I could have seen college campus radio falling in love with. I think that actually happened on The Earth Pushed Back in 2013. "Let's Talk About Your Hair" was one of the catchiest, most accessible melodic-rock jams I heard in quite some time and still remains one of my favorite songs to date. However, they rushed into A Place Of Our Own a year later, jumping ship from Topshelf to Hopeless Records and it felt like they weren't patient at all. They lost the edge and energy of the first record, and while this sophomore wasn't that bad, it came off as dull and a tad uninspired. Make The Best Of It is aptly titled as band changes since have seen lead singer, Brian Swindle, as the main person remaining in what may as well be his solo act. That said, this album continues to keep the Have Mercy brand stagnant and disappointingly makes surpassing their debut a tall order.


"Smoke and Lace" and "Coexist" are probably the only songs that recapture the magic of the first record. Everything else tries too hard to repeat the slow/loud dynamic they pride themselves on. Sure, you got melodic swells and catchy riffs, but too many songs sound repetitive. Even the slow burns such as "Ghost", "Baby Grand" and "You Made Me" don't register as breaks in monotony. "Good Christian Man" feels like a B-side off the last album and truth be told, I can't fault the lack of energy given the losses in the roster and how Swindle struggled with relationships and religion. It did create room for another strongly-written album but lyrical content aside, there's a lot to be desired in musical execution. "American Bliss" is a rare gem with some mathy, guitar-flexibility that leaves you wondering when Have Mercy are going to stop being a one-trick pony. They have what it takes but just don't seem ready to take that next step. It's a good record, I admit, but seriously feels like they gave the bare minimum.