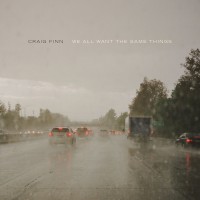 As triumphant as Craig Finn can sound, his characters aren’t usually winners. Life has its small victories, sure. But his entire career (with Lifter Puller, The Hold Steady and most recently solo) is about crafting detailed accounts for and by the losers. On his new album, he is finally able to get out from under the shadow of The Hold Steady and make one hell of a devastating beauty.

We All Want the Same Things compiles ten distinct stories, each so clearly with its own identity. “Ninety Bucks” starts out with, “She said Nathan I need ninety bucks, puts Popov in a paper cup, it’s like she’s trying to burn her insides clean.” From that lyric and the music surrounding it, you know it doesn’t end well. The same goes for “It Hits When It Hits” about premature steps in an early relationship. The idea that “today is gonna be a celebration” is misguided from the start. “Tangletown” is about two people who think they deserve better without looking inward. Every song is literal yet beautiful as Finn has never been one to hold back on details. Now, though, there’s no glamour in the songs unless it’s self-manifested. There are plenty of failures without the narrator every really knowing it which is the hardest part to hear.

“God in Chicago” is the centerpiece and one of the best songs Finn has ever penned. It tackles many of his favorite topics including love and drugs but they've been manipulated with age. Finn speak-sings over sparse piano, “This isn’t the movies,” an accurate observation of most of his songs. In less than five minutes, he tells a brutally honest story only made better by one of the year’s best music videos.

While his first two solo efforts were not bad, they felt merely like “Hold Steady front man goes solo.” Now he has the right band to accentuate his narratives. Subtle flourishes add great value, like the backing vocals and hi hit in “Birds Trapped in the Airport,” the guitar solos in “Jester and June” and “Ninety Bucks,” the horns in “Tangletown.” “Be Honest” has a little of everything with its sprinkled piano, flutes, and horns.

Craig Finn is one of the most beloved songwriters of the past decade, so it's nice to finally hear him find his solo sound. He makes us the viewers on We All Want the Same Things but the album hints that we need to look internally more often.