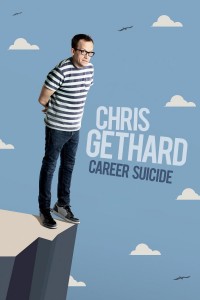 Chris Gethard is one of those people you have heard or seen at least once if you like pop culture and comedy - he's popped up as an actor in Broad City and Parks & Rec, has his own podcast and cult TV show, and is a stand up veteran going back more than a decade. And of course he's a Smiths/Morrissey fan, the kind of guy who (like me) sings the lyrics with no irony because damn it this British guy is speaking directly to your heart. As he says in Career Suicide, "I was the kind of 21 year old who listened to the Smiths" and you look at him and know he's not bullshitting. Career Suicide is appropriate for a Smiths fan, a direct heart on sleeve confession, cathartic monologue, and reckoning with Gethard's anxiety, depression, and mental health.


What makes the show work so beautifully is the 90 minute push and pull between humor and a deep pain. Gethard invites laughs about the absurd, unprofessional behavior of his longtime therapist Barb...right after talking about coming very, very close to suicide. He speaks about panic and sadness with the hilarity of someone who knows they are his constant companions, not afraid to laugh them off but also able to convey how unbearable his mental demons can be. Like the punk and emo he clearly loves (as evidenced by the Laura Stevenson closing song here) Gethard invites and gives back empathy and compassion.


And the direction by Kimberly Senior does that too - she knows exactly when to push into Chris' face as the lighting goes dark and his tone grows more somber, then when the camera should pull away for a laugh, disarming the audience. One of the nice touches here too is how intimate the whole production feels; its less a one man show than ninety minutes of an interesting guy telling you about his life, the armchairs circling Gethard and his bringing in the "front row" much like a coffee shop reading, not an HBO project produced by Judd Apatow. Senior and Gethard craft a show appropriate to a man who bears his Morrissey tattoo to you, whose final minutes onstage made me well up in their grateful, overwhelming emotion.


By no means is this special never-endingly funny, but the balance between comedy and tragedy here is unique and perfect for who Gethard is. I'll put it this way, Gethard is the kind of person who would host a podcast where he lets someone talk to him on the phone for a whole hour (and he does). And based on this special, based on his tenderness and humor, he simply would not hang up because he'd assume you really did need to talk. God knows he does. We all do sometimes.