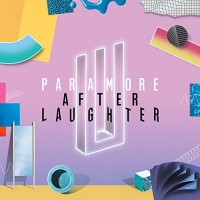 Paramore may be cheesy but for many they're a guilty pleasure. They're also one of those bands that old fans don't age with well but somehow they manage to remain at that level drawing teenyboppers in constantly. After Laughter is an interesting addition to their catalog, detailing their experiences in the business as well as their internal changes in roster, but oddly enough it's done to a musical backdrop that's scrubbed almost all elements of punk and gone totally pop. It's still emo but coated by their fizziest music to date, channeling every desire they have to make an '80s electro-pop album.

There are so many bubbly melodies on tap but done very minimally through synth beats -- all allowing Hayley William's voice to move to the forefront like never before. "Hard Times" and "I Told You So" are head-bobbing, foot-tapping disco-tinged jams while "Grudges" feels like a tribute to The Cure. Cute but things get a bit boring as too many songs follow the same pattern. Paramore keep things more pop in the pop-rock habitat they intended here and there's nothing wrong with that, but the songs could have been differentiated much more. "Caught in the Middle" is an example of this as it's a catchy, tropical ska-esque jam that definitely will be hot fyre on their Parahoy! cruise to the Bahamas next year. More of that was needed.

It seems that they geared this album just for a chill vibe under sun, sand and sea because the dramatics and teen angst of All We Know Is Falling and Riot! are gone. Instead, it's a simple batch of rhythms that finds the band at their most mellow. By the time Williams tries to copy Rihanna on "Tell Me How" you're still inclined to give the album another listen or two. It's not a bad record at all if you want candy in a nutshell.