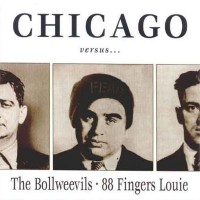 Hopeless Records boasted an impressive line-up of underground punk back in its early days. Now, I’m hard pressed to name three bands on the label that bare any connection to its original identity crafted over 20 years ago. Once Avenged Sevenfold became the focal point of their efforts sometime around 2005, I tuned out entirely. However, looking back I always hold several of the label’s releases in high regard and one of these is the Chicago vs. Amsterdam mini-split compilation from 1996.

The Chicago side of the split begins with “Talkpeople” by The Bollweevils; a fast-paced rattler that’s both aggressive and melodic at the same time. Although the band never released an album on the label, I always seem to incorrectly assume that they did, which maybe points to the power of compilation tracks from this era of punk; simply featuring one song a release meant that a band is part of the label’s family. 88 Fingers Louie, a Hopeless Records regular from the beginning, rips through “Unfocused” with fast riffs and no-nonsense vocals that deliver a hard dose of anger. Apart from the obvious fact that both bands hail from Chicago, these two were also featured together on another split called Viva Chicago two years earlier which perhaps acted as a precursor for this release.

The Amsterdam side of the split starts off with “I Can Not Stand” by my own personal favorite Hopeless band, Funeral Oration. Criminally underrated with little to no hype surrounding most their catalog, this Dutch band never broke through to the masses during the boom of 1990’s punk and remain a headscratcher for most. This B-side track sounds like it was taken from their Self-Titled recording sessions and delivers and hard, banging anthem with one-of-a-kind vocals that distinctly pronounce the two words “can” and “not,” as opposed to “cannot” or “can’t.” The split closes with the track “Fuel” by NRA; intricate guitar lines and vocal harmonies combine for an enjoyable song that is different enough but not out of place here.

At a total runtime of nine minutes and 12 seconds, the Chicago vs. Amsterdam split release leaves the listener wanting more, but in a good way. I actually think that the short runtime makes me revisit the compilation more often; sometimes I’m in the mood for a quick listen that has some variety to it. Lastly, the original artwork representing each city’s side of the release – Al Capone for Chicago and Vincent van Gogh for Amsterdam – helps give it a memorable look that a bundle of mp3 files in a file folder can’t match today.

AFI: Behind the Times [EP]