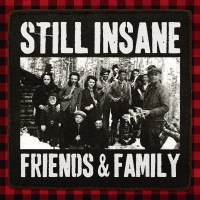 Hailing from the French part of Canada, Still Insane continues to perpetuate Quebec's ongoing surge as one of the world’s true punk rock Meccas. On the recently released EP, Friends & Family, their first new music in five years, the band shows that they haven’t missed a beat in the interim with an energetic and eclectic album.

Describing Still Insane is actually fairly easy and, although I try not to make direct comparisons too often, I feel confident that they are basically the devil child of the trinity of Pennywise, Bouncing Souls, and Millencolin. While they encompasses the styles of these three bands, certain songs give you more of a particular vibe than others.

Bookending the EP are the lead track “Follow the Flame” and finale “Daily News.” Both of these songs are well composed and large in scope and style. They also gave me a huge Bouncing Souls feeling when listening to them.

Second and fourth songs, “The Split” and “Wires & Tubes” respectively, were quite a bit harder and fast-paced. Once again well composed, though, which is a plus. “Wires & Tubes,” especially, is a hard-hitting song for anyone who has had to watch a friend or loved one seemingly trapped among the assorted machinery and devices while in hospital. I’ve been there and done that, and this track made me recall the emotions of that experience. It is cool when a song can elicit that type of response, even if the memories aren’t so great.

Through all of that good stuff we have the middle song- a song so good they named the EP after it: “Friends & Family.” Truly the standout track on the album. A rolling percussion intro starts it off, and is soon joined by the other instruments one at a time until reaching a crescendo, pausing, and then tearing into the song. An ode of sorts to the good and the bad traits of one’s, well… friends and family… this is a catchy song that is hard not to love and identify with. One particular set of verses with the lead vocals and a screaming backing vocalist makes me laugh each and every time:

Here is the one who always gives advice.
(DO WHAT I SAY!)
That’s what he does.
(THAT’S WHAT I DO!)

Another aspect I really enjoyed is that the vocals fall into the best of what I like to think of as ESL* Punk (*English as a Second Language). Being French Canadian, the band (I include all of them, as there is A LOT of backing vocals) is singing in English, likely a non-native language for some, if not all, of them. Like Millencolin, Randy, Hi-Standard, and other ESL Punk bands, there is a certain cadence and quality to their pronunciation that actually adds to the song.

There is a loosey-goosey style to a lot of Still Insane’s music (another trait shared with Bouncing Souls) which is enjoyable. However, if there is one particular point that was a bit off-putting, it was the percussion. Not the skill of the drumming, which is phenomenal, but the editorial decision for some transitions. Points where a roll or a fill would’ve sounded better than a hit on the crash. I’m not knocking the drummer’s chops, just the decision to play these parts as they ended up on the album.

Overall, this is a fun, frenetic, and exciting return for Still Insane. I hope that they are working on more material, because five songs isn’t enough for a band this enjoyable.

AFI: Behind the Times [EP]