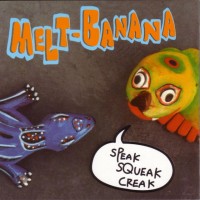 “Melt-Banana are band from Japan who play “music”, but not really…”

That’s what a close friend of mine told me in college. He then proceeded to play me some of their tunes, and well… it was crazy. I remember thinking to myself, “this must be the college music stuff I expected to learn about by osmosis.” My buddy was a huge Mike Patton fan and he loved all his projects which included the infamous, Mr. Bungle. He witnessed Melt-Banana open for Mr. Bungle and he recalled just how insane the show was for the then three-piece act from overseas (now a duo). It must have been awesome because he would not shut up about them years later. The opportunity to share them with someone he thought open-minded was exciting for him. Thanks Frank!

Here we are, many years later and reflecting on this act. What this review is about is their debut from 1994, Speak Squeak Creak. It lasts a little over 28 minutes…

Ok, so what you should know going in is that this band is pure noise. Noise, but with elements of electronic, Grind-Core, Punk, Metal, and some of that John Zorn Jazzy Hardcore harshness. (If you have never heard of Naked City by John Zorn get in on that now!) Oh, and Steve Albini helped engineer it. His work is groundbreaking in outsider music.

I cannot really detail each song because they are so erratic in execution and format. This is almost like performance art being slung through the gutter and spat out by an Anime character being assaulted if that makes any sense. The titles are interesting though, with little numbers like "Mouse Is a Biscuit", “Smell the Medicine", "Chicken Headed Raccoon Dog", and "Cry for More Fish"

Lead singer Yasuko Onuki has this almost ear bleeding high pitch shout vocal style. It totally fits here because it wouldn’t fit anywhere else. It’s like it was designed specifically for this band. She sings a mix of Japanese and English, which is hard to tell apart and the lyrics tend to be nonsensical filled with mostly words that rhyme for rhymes sake. Oh, and she raps too.

The racket of noise this band brings can start a pandemonium of tumultuous panic in the listener, AND YET, its friggin awesome man. Guitarist Ichirou Agata ushers in unorthodox guitar work with extended techniques. He tends to overlap two different guitar riffs, simulate lasers and sirens, cues from video games, and filters it through a large amount of effects pedals. He also wears a surgical mask on stage because he tends to get nosebleeds.

Frank was right in his enthusiasm. Melt-Banana are cool!

If I have to pick one “song” out of the 25 here, I’d say the final track “untitled” is worth a listen. The song is pure novelty because it’s all the previous 24 songs combined into one. It has this sort of atmospheric brilliance to it and a fitting end to an album that you probably couldn’t keep up with on first listen.

Melt-Banana are still around, touring, and tight as ever. They have a cult following as most unique underground bands do. What probably sealed them for me was a quote by John Peel after having them play one of his legendary Peel Sessions:

"Simply one of the most extraordinary performances I have ever seen and ever heard ... just mesmerizing, absolutely astonishing."

The dude had a point. Dig it…