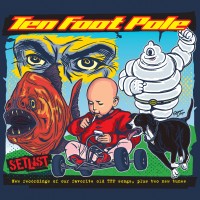 Ten Foot Pole are a great punk rock band, always have been, and apparently they always will be. The band’s most recent material, and appropriately titled full length Setlist, is a record consisting of 10 newly recorded, but previously released tracks, and two brand new songs all featuring vocalist Dennis Jagard. The new and revamped songs were produced and mixed by Kyle Black and sound sharper and cleaner than ever.

Setlist is a fast, upbeat and melodic skate punk record, with many old favorites and two great new songs. The melodies are huge and the vocals are memorable and catchier than ever. I was a little concerned before getting into this record that the band may have become stale, or that they were trying to rekindle past success, but Ten Foot Pole have crafted a great punk rock record with Setlist that really highlights the skill of current vocalist Dennis Jagard.

The huge chorus in the opening song “Scars” sets the stage for a record packed full of melodic sing a longs and circle pits. The lyrical content is playful yet heartfelt, and exactly what one might expect from previously released Ten Foot Pole albums. The flow and production of the record as a whole has resulted in a very polished and evenly flowing album. It is evident that over the course of the bands career they were able to properly piece together the track listing to optimize the listening experience.

I enjoy all of the songs on this record, both the previously released hits and the new songs; the entire record is solid from front to back. I can see how some may be turned off of this record by the simple fact that old songs have been re-worked with different members, but if you strip it down, Setlist is still an awesome and familiar skate punk experience.

Avid punk rock purists may scoff at this release, but I think Setlist is exactly what Ten Foot Pole needed. Setlist is executed expertly and with confidence; the songs sound clean and tight, and the flow is great. I can understand how some may avoid this release, but I find it seriously hard to believe that any fans of punk rock and pop punk in general, would have a difficult time finding something to enjoy here. This is a solid release from a classic skate punk band, it might not be the Ten Foot Pole of old, but I think it is a sign that good things are coming in the future.

Madball: Hold It Down