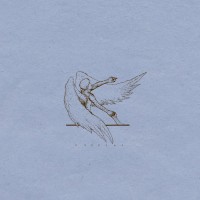 ostraca's deathless was a powerful wall of sound crashing down on you but it still felt a bit thin. Unrefined -- would be the word that best fits. last however finds the Richmond band perfecting this wall, thickening it into something more. By record's end, it's clear that it's now a mountain collapsing down on you in a haze of post-metal, screamo glory. It also meets the expectations they set with with faces of the moving year split earlier this year.

They're an experience of so many genres but mostly it's that destructive black-metal sound that rises to the surface on this album. It's not as serene as say Alcest, but more of a middle ground between State Faults and Deafheaven. This album's got a lot more melody to it too as with the opener "Waiting For The Crash", "Nausea" and "Childlike." I love how the songs have little breaks in them too and don't jar you with relentless anger. "Worn Away" closes things off and feels like a Jack Shirley production, reminding you how many bands that City of Caterpillar influenced as well. ostraca bring the house down and unsurprisingly so. Here's to hoping the album's title isn't indicative of the future.

Madball: Hold It Down