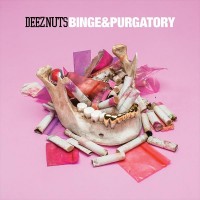 It would be fitting to describe Australia’s Deez Nuts as a polarizing band, and they have been since the band first began. Whether it be the crude nature of the bands moniker, the fact that the band has had trouble fitting into the traditional hardcore or punk rock scene, or the not so subtle hip hop influences of the vocal delivery. The bands most recent full length Binge & Purgatory came up on my radar from a mutual friend of the band, and it turned out to be an interesting listen.

Deez Nuts definitely fall into the heavy hard style sub-genre of current hardcore. The riffs on Binge & Purgatory were a solid and nice surprise. I had expected a bit more of a trip into metalcore territory -- as opposed to hearing hard riffs influenced by hardcore greats like Madball, Leeway, and Hatebreed; as well as influences from contemporary hardcore bands like Trapped Under Ice and First Blood. The music itself is groovy and heavy with some cross-over two steps thrown in, the drums are bouncy and solid and the production is spot on for the genre. Musically, Binge & Purgatory holds up much better than I had initially expected.

My biggest issue with this record is the vocal delivery itself. The vocals are a mix of rapping and yelling that is somewhat reminiscent of nu-metal bands like P.O.D. or perhaps in a better light Biohazard style, but with more of a rap rock delivery. It is far from the worst vocal delivery I have heard, but it does start to blend together after awhile. The guest vocal spots add a dynamic to the songs that I wish was present more often. That being said, some of the songs stand out vocally more so than others, the song “Discord” comes to mind with a slightly more melodic chorus.

This record will not be for everyone, and with a band name like Deez Nuts, I know that many noses in the hardcore scene are permanently turned up. I wanted to give the band an objective listen, and the conclusion that I have reached is that Binge & Purgatory offers bouncy and engaging heavy hardcore riffs, with nu-metal influenced rap rock style vocals layered over top. I enjoyed this record more than I thought I would. While it is not my normal standard for hardcore, (and this band is far from reinventing themselves within the heavy music scene) this record may be a bit tough to take seriously for some, but it has its place. For anyone that enjoys heavy hardcore breakdowns and bouncy riffs, there is something to enjoy with this record, even if the aesthetic may be difficult for some to overcome.