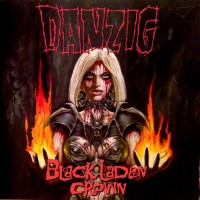 Probably the most ironic thing about Danzig’s new album, Black Laden Crown, is that despite the cheesecake cover and the Wacky Races tinged lead single of “Devil on Highway 9,” it’s actually his most mature album to date. And, on top of that, it’s certainly his gloomiest, at times referencing the grimy murk heard in the darker recesses of Samhain.

In stark contrast to 2010’s Deth Red Sabaoth, which at times seemed to allude to the harder rocking, high energy aspects of Led Zeppelin, Crown finds Danzig and collaborator Tommy Victor pulling waaaay back on the reigns and dealing more in ambiance and texture than bluesy licks. It’s a smart move. Now in his sixth decade, Danzig very much has the world experience and deep knowledge that he’s hinted at ever since the end of the Misfits and he convincingly inhabits the elder Odin character he portrays throughout the album.

The album is mainly focused on doom and despair and Danzig underscores this sense of dread by putting his fundamental ear for melody at the forefront. Still a student of the Roy Orbison/Elvis School, Danzig masterfully bends classic pop melody around this heavy material resulting in a contrast that is as stirring as it is clever. Really, this release may be the apex of Danzig finally merging his love of early country-rock with the dark vision he’s detailed for years.

Victor follows the lead of the bossman and usually acts as an effective counterpoint. On Death Red Victor would punctuate nearly every riff with an earpiercing squeal, which tended to undercut the soul and melody carried by Danzig. But here, a number of the tracks open with Danzig building to his trademark bluesman crescendos while the song rides out with an extended jam by Victor. It’s a nice call back to the classic era of 70s rock and also serves to set the album’s dark mood. Frankly, this is some of the most organic and soulful we’ve heard the band be.

And that’s what makes “Devil on Highway 9” so puzzling. It’s pretty much the only straight-up rocker on the album and, in contrast to the shadowy lyrics heard on the LP’s other eight tracks, simply tells the story of a drag racing demon. Maybe Danzig was going for more of a Dylan or Cave style juxtaposition ala Highway 61 Revisted or Dig Lazarus Dig, but when contrasted to the slow burning fire of the album’s other cuts, it just seems out of place. The b-side to a 7-inch would have been the perfect place for this Misfit-sy track.

Likewise, unlike any previous Danzig/Samhain/Misfits release, all of which run the gamut of production style and quality, Crown is the first album to suffer from production. Most Samhain albums are probably pretty poorly produced under the standard producer’s gauge, but the bleeding, hissing style on those records served to increase the menace and horror of the lyrics on those tunes. Here, the band seems to be caught between the warm analogue production of Deth Red and the sharper, more metallic production used by Metal Blade records. The result is a confusing mix that makes odd choices with the vocal tracks- track by track Danzig’s voices seems to jump from high in the mix to low, both in different volume and clarity, so that when he comes in on “But a Nightmare” the sudden volume and clarity of his voice stacked on top of the gloomier music is jarring and almost amateurish. Surely, a few days with an audio engineer and just a little bit of money could have corrected the issues. (In fact, I know they have, because, as a rank amateur myself, I have had several producers take complete cheesy sounding mixes and whip ‘em up into something presentable in very little time with relatively little investment).

Still, it’s telling that despite these flaws, Danzig’s underlying song craft cuts through the sonic issues. Danzig seems to both be returning to the dark, heavy rock of his youth as well as coming to a focus with the dark premonitions that he’s referenced throughout his career. The fact is, on Black Laden Crown, Danzig seems to have reached the conceptual and sonic epiphany he’s been searching for since the end of Danzig 4. The production issues may dampen this epiphany to a degree, but a production problem in of itself is not enough to buckle the dark message behind the computerized choices.