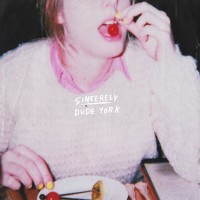 If there’s one influence splattered all over Dude York’s new album Sincerely, it’s Weezer. They creep into everything: lead singer/guitarist Peter Richards’ vocals, he and bassist/singer Claire England’s ability to craft crunchy indie pop, the delicate straddle of gloomy and energetic. If you’re casually overhearing “Life Worth Living PT 2” or “Twin Moons,” there’s a good chance of confusing it with a long lost Weezer B-side. But this Seattle trio has much more to offer.

Most notably Claire England, whose voice roots the two strongest tracks. “Tonight,” Sincerely's finest, asserts her sensitive cockiness, “I might be wrong but at least I'm sure that you're not right. Let's wrap this up, there's somewhere else I gotta be tonight.” When Richards takes over again on “Paralyzed,” his voice seems reinvigorated, knowing the bar has been raised. On “Love Is,” England delivers, “I’m a Courtney, I will drain him” reiterated by the hook, “And that’s all that love it.” Her bark, sugary but threatening. Richards does his own due diligence balancing uplifting guitars with melancholy lyrics. On “Giving Up,” he sings, “I’m giving up on life, giving up on hope, giving up on truth.” Like most of Sincerely, it’s easy picturing fans relating then regurgitating the lyrics back to him in total earnest.

The band recorded an original version of Sincerely before ditching it and entering the studio with Cody Votolato (Blood Brothers) and John Goodmanson (Sleater-Kinney/Bikini Kill). While Dude York’s natural, raw energy subsists, the polish elevates it. Again, with early Weezer as the marker, you know the direction they’re headed. Both Votolato and Goodmanson are perfectly capable of keeping the band from straying too far from their home-recorded versions. The guitars stay crunchy especially on “Black Jack,” but it’s easy to hear what the vocals and Andrew Hall’s lively drumming have gained from these guys behind the boards.

Sincerely runs slightly longer than necessary but never feels slow or bogged down. Any song on the album does Dude York justice, a real credit to these young kids.

Lilys: In the Presence of Nothing [reissue]