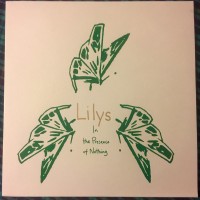 2017 started on the right track with the reissue of Lily’s 1992 debut album, In the Presence of Nothing. Lisa Fancher of Frontier Records fame worked alongside sole Lily’s OG member Kurt Heasly to get this long sought after work back into the hands of hardcore shoegazers of the world. To say that this was anticipated is putting it lightly. Since the original release of the album on Slumberland Records, first pressings of the record have gone to extreme prices on the secondary market. Even an original cd copy can almost cost you 100 bucks!

Just like last year’s reissue of Lily’s second album, Eccsame the Photon Band, Kurt and Lisa have put a lot of work into making this reissue standout and become a huge gift for the fans. However, before I dig into the details of the package, let us talk a bit about the music and why it is so important that this came back into the spotlight.

Whenever I talk about the shoegaze genre with someone, I always like to name-drop my favorite artists and their best albums. When it comes to Lily’s I often get blank stares. Why no one knows about this band and the amazing debut record is tragic. To help whomever I am speaking with I always ask, “Hey, you like Loveless don’t you? Well In the Presence of Nothing is like the American version of that album!”

I do not take it lightly when I make that comparison, but it is the best way for me to get someone interested. Moreover, I do not mean it in a derogatory way either! Seriously, if you like Loveless then you should surely like ITPON.

Take everything you like about shoegaze in general and add on more of a 90’s East Coast indie rock vibe and you have the perfect concoction of noise, or as critic Robert Christgau described, "Amplified watercolors".

This reissue of ITPON has all the original album tracks plus an additional three tracks from the Tone Bender ep. Those bonus tracks are a wonderful addition since they contain the first Lilys tracks ever out, “February Fourteenth” and “Threw a Day” as well as the track “Eskimo”.

Right from the start, this album blasts forth after a buildup that is both exciting and terrifying. Once the guitars start scorching you know that wall of sound is now taking over and you get goosebumps. This is that sound you have been looking for that many other so-called shoegaze bands do not really act on. MBV were always the ones who could do it proper, but there was no one else you thought. However, right here it is in your face and blasting through. "There's No Such Thing as Black Orchids" is a perfect opener and the dramatic mix of wailing guitars, drums, bass, and Kurt’s lo-fi sounding voice in the background envelope you in a deep pool of eargasmic frosting.

Things are just getting started though because the second track is even more amazing. "Elizabeth Colour Wheel" is perhaps the album standout and it is a nice slow climb with atmospheric texture that is wrapped up in warmth and emotion. “Collider” is another standout with dynamic shifts from pop sounding to heavy crunching, and "Periscope" has a nice punkish vibe with heavy bass bleeding through. You want more rockin’ tunes though? Well check out the track “Tone Bender” for a very heavy, almost droning sounding song that can remind you of modern acts like Isis or maybe Boris. Also not to forget, you must check out the track “February Fourteenth” with its noisy, Jesus and Mary Chain-like approach if that even remotely interests you.

While shoegaze might have been a huge UK thing with great bands like Slowdive, Ride, Swerve Driver, Catherine Wheel, Verve, Lush, and Chapterhouse, America had its fair share as well. Bands like Drop Nineteens, Velocity Girl, Swirlies, Starflyer 59, and of course, Lilys are some of the many and sadly left unnoticed outside the scene and the occasional retrospective. That should not be the case and this reissue can hopefully bring back some of those missing pieces of a certain time in music.

Seriously, try this and dig it…

The Garden: U Want the Scoop? [EP]