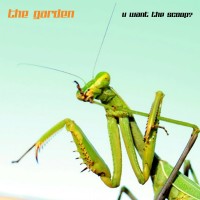 It’s a theme in the Garden’s discography to take risks between major releases and see how far their ambition can carry them. Between their self-titled debut green tape and their first proper album Life and Times of a Paperclip, the band released Everything’s Perfect, which straddled their hyper-minimalist bent with more fleshed out punk-craft. Similarly, The Vadaverse Platforms, which was released between Paperclip and their masterpiece Haha found the band diving deep into electronic music, welding the genre to more standard punk resulting in a release that was as daring as it was off-kilter.

U Want the Scoop? continues this trend, and notably, finds the band doubling down on their daring directive. Almost completely electronic, U Want the Scoop? utilizes electronic instuments as instruments and not necessarily as beat fabricators- which works well. The title track feels more akin to the weird LSD records of the late 60s than the dance club. As a thick buzzing washes under the band, the Shears brothers pair alternating agonized and indifferent screams while painting their abstract world. At times, it seems as if they are trying to bring Salvador Dali paintings into a sonic context.

Comparisons have been made to the Butthole Surfers for the release and the seemingly (but not really) random nature of the release paired with its surrealist storytelling might make the comparison apt. But, this isn’t Butthole Surfers aping, or really, even influenced. More likely both acts come from their own unique, removed perspective and the comparison is made just because this release is unlike any conventional genre: synth-punk-garage-rock-abstract-alt-rock-poetry????

Case in point, the EP’s centerpiece is the rollicking “Have a Good Day, Sir.” It’s built around the Shears’ brothers iconic, mammoth bass and drums rumble. But, just as the track takes off, it breaks down into a daunting synth-crunch. Wyatt Shears details an outlaw-lite tune where he avoids paying traffic fines only to get pulled over. But, just when it seems like he might get the metal bracelets, he convinces the cop to let him go by claiming he loves Buck Owens and playing on the cop’s seemingly suppressed homosexuality. There doesn’t seem to be so much a moral as a contrast in characters.

And that’s probably what makes the Garden so interesting. The band exists as much as puzzle as an experiment. Instead of making references to troupes or genres, they willfully engage in soundclash, often without precedent or “respect” for genre. That is to say, this band respects their audience enough to let the listener form meaning, both lyrical and sonic, on their own terms, instead of demanding an adherence to one message.

Lilys: In the Presence of Nothing [reissue]

Head North: The Last Living Man Alive Ever In The History Of The World