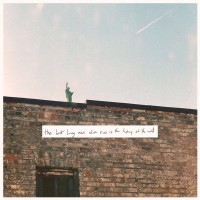 Head North's new record will surprise you a lot. If you're a fan of Bloodlines like me, this shift in direction takes some getting used to. From pop-punk to indie/emo, they're now an experimental rock act incorporating so many different styles. Mainstream radio-friendly bands like Cage The Elephant and Young The Giant come to mind, but if I had to sum up what The Last Living Man Alive Ever In The History Of The World sounds like, I'd say -- if FIDLAR did a dance record.

The synth-heavy, spastic dance tracks unfurl themselves with "White Light" and "Broke" (a bonus track), freeing up an album that's lost a lot of its hard rock edge. This has been sacrificed for low-tempo jams and country-tinged acoustic spines. The good in all this is that each song is unpredictable but the bad is that the record comes off a tad disjointed. Bouncing around tracks like "By Presidential Decree" (a spaced-out vibe a la Gates) and "Head North is a Business" (which highlights that FIDLAR comparison I made) keep you guessing but they don't really help you prepare for the dance-rock to come. Before I'd lump Head North in with bands like Balance and Composure, but now they're clearly their own thing. It'll take some time to process but all in all, it's not a bad thing.

The Garden: U Want the Scoop? [EP]