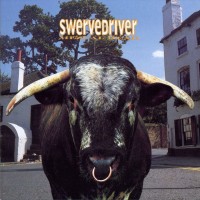 Mezcal Head released to the public in 1993 on UK’s famous Creation Records, home to contemporaries like My Bloody Valentine, Teenage Fanclub, and Oasis.

Swervedriver stood out amongst their Shoegaze brethren. They incorporated a harder Rock vibe, elements of Psychedelia, and 80’s college Indie Rock. After their excellent debut, 1991’s Raise , the band took two years to come back and unleash a more focused album with drive and purpose. Alan Moulder handled production with the results being a bigger, clearer sound.

Lead track “For Seeking Heat” starts with a brief quiet build-up until it explodes with major riffage and washes of guitar feedback. Lead singer Adam Franklin is a terrific vocalist with his musical chops put front and center on this opener. The song has a very nice flow and the lyrics incorporate catchy sing-a-longs with an almost rhythmic quality to them that does not graze the listener with your typical Shoegaze junk food. This is the start of something very good here.

To prove the band is more than what labels and rags regarded them as, they usher in a straightforward single in the song, “Duel”. This track opened them up to the public and became NME’s single of the week. The album launched tours with the Smashing Pumpkins, Medicine, and the much-underrated Shudder to Think. “Duel” is an awesome track and the melodies created by the musicians carry the song over the edge and give off that great vibe of good times on a hot summer daze. A track you put on in the car while heading down the road somewhere. Those are some of the best types of songs…

A nice element to the album is how each track fades into the other. “Duel” fades into the third track “Blowin’ Cool” and the transition is smooth and keeps the flow going. What is noticeable is how much the album includes elements of Alternative Rock/Indie Rock. The tracks are accompanied by driving movements, build-ups, and waves upon waves of colorful guitars that end up enveloping the listener with an overall wall of sound in a bubble. Dinosaur Jr did this so well on their album, You’re Living All Over Me, and so does Swervedriver here.

The song structures hardly change, but when they do, it is for good reason. “MM Abduction” is a highlight and has this sort of Superchunk feel reminiscent of Mac McCaughan singing on the song “Keeping Track” off their best album Foolish . This is perhaps the most “sad” sounding song on the album, but it is a treat because it does not become “something to ignore”. It breaks the mold a bit and keeps things fresh.

Chock-a-block with peppered catchiness, “Last Train to Satansville” is another standout with a chunky texture and a Grunge sound. The track gets room to breathe with a bit of a longer length and mostly instrumentals towards the end, which have a Sonic Youth vibe. This is commonplace on the album and missed by a lot of today’s music. There is just no patience anymore for the art and form of music unless it is harsh lightning Post-Rock... However, there is still wankery, but if your name is not Eddie Van Halen or Vünter Slauche we can do without that.

I could keep going on and on about how awesome this album is. Tracks like “Harry & Maggie (Dragging It Under)”, “Girl on a Motorbike”, and “Duress” need to get their due as a trio of later half songs that almost make the second side better than the first, “Girl on a Motorbike” especially. All these incredible songs bring us to the eventual climatic end with the track “Never Lose That Feeling/Never Learn”, which is over 11 minutes of psychedelic mind rape. The track takes it sweet time and the sneaky brass section adds a scary layer that brings to mind the Jazz Fusion days of Miles Davis. The floorboards shift and the walls begin to melt. There is a fuzzy atmosphere that is confusing, and yet swathed with a warmness to it. This is the stuff man. This is where Shoegaze becomes something taken for granted because not all followed the same formula. Other bands did this well like Spacemen 3, but so does Swervedriver.

Yet again, here is another band worth praising and missed out on. Things are not all bad though. They reformed back in 2008 and released and new album in 2015 called, I Wasn't Born to Lose You . As I have said before, it’s a good time to be a fan of certain things. Music is one of them.

Head North: The Last Living Man Alive Ever In The History Of The World