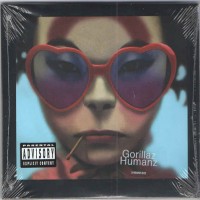 I’m a little late on this one. This album’s been out for over a month, and I noticed nobody else had posted a review of it, so I wanted to take a crack at it. The problem was, I really couldn’t decide how I felt about this album for a while. Someone recently called me the most decisive writer on this site, and yet I couldn’t decide if I loved this album or hated it, and thought it might actually be both.

Let me back up here. I love the Gorillaz, specifically because my degrees are in film and media studies, so I love the idea of a multi-platform storytelling project like the Gorillaz. The Gorillaz are more than just the music. Damon Albarn of Blur fame and animator Jamie Hewlett, who also created Tank Girl, invented an amazing and bizarre world of a fictional, animated hip-hop/rock band with creepy songwriter and bassist Murdoc, airhead singer 2-D, teenage girl guitarist Noodle who is also a highly trained assassin and was at one point was replaced with a robot version of herself, and the American drummer Russel who was at one point possessed by phantoms that would sometimes come out and rap on songs and who at another time was living in Ike Turner’s basement. The only consistent member of the real-life band has been Albarn, but it has at times included such big name collaborators as Danger Mouse, Tina Weymouth of the Talking Heads, and even Mick Jones and Paul Simonon of the Clash.

The first thing that put me off about this album was that the album was incredibly long. And I know you’re thinking, “Well then why did you grab the deluxe version instead of the regular version?” Well, it’s because even a quick glance at the track list will tell you that the deluxe version of this album is not just the album with a few studio outtakes, it’s the version of the album that Damon Albarn wanted to make. There’s even a bonus track that’s been released as a single off the album. And I felt like if I was going to take a crack at reviewing this album, I had to do it with the deluxe edition because that’s Albarn’s vision.

The second thing that put me off about it was that almost every single track on the album, aside from the non-musical “Interlude” tracks, listed a featured performer after the title on the track listing. Most Gorillaz albums are half filled with tracks from guest vocalists, and the other half are made up of songs that feature Albarn on lead vocals (as 2-D). This album only had one track that did not list a featured performer, “Busted and Blue,” which is a rather dreary little tune. I was weary of an album that put so much focus on guest performers rather than Albarn, especially since the only performers’ names that I recognized were De La Soul (doing their third collaboration with the Gorrilaz), Carly Simon, and Jehnny Beth from Savages (although Beth’s song also had Noel Gallagher of Oasis on it, which was not listed on the track listing).

So, after trying to listen to it a few times, I was having trouble getting into it. But that’s when I remembered that the whole reason I love the Gorillaz is because it’s a multi-platform project. You can’t experience a Gorillaz album in a vacuum, because it’s not designed that way. You have to find the media that was put out to accompany the album and look at the story it’s telling to really appreciate it.

The Gorilllaz YouTube channel offered up just a couple of things in association with this album, but they were very valuable. First of all, there’s a 30-minute live action interview with a real interviewer and CGI versions of Murdoc and 2-D (with Russel calling in on the phone) that was absolutely hilarious. Apparently the reason there was such a long gap between this album and the last was because the record company threw Murdoc into their own private prison underneath Abbey Road studios for breach of contract violations. With six singles already released off this album, only “Saturnz Barz” has a proper music video. The video depicts the band moving into their new rehearsal space, which is a haunted house. That makes sense because guest performers are almost always depicted as ghosts in Gorillaz music videos, and this album has a lot of guest performers. The channel also directs you to the new Gorillaz mobile app, which is really cool. It looks like it’s just a camera app when you open it. You have to take a picture of something magenta to get access to the real content, which is a tour around a room of the Gorillaz’s new haunted house rehearsal space. Clicking on certain things in the room takes you to links of interest like a Spotify playlist of Murdoc’s biggest influences, and one link that takes you to a YouTube video about Anton LaVey for some reason. So the theme of this part of the Gorillaz story seems to be about a lot of ghost voices talking to you after a major disaster.

I say “after a major disaster” because I did some research and found that Albarn wanted to create an album that felt like it took place after a world-changing event, so he instructed all of the guest performers on the album to pretend that Donald Trump had just become president. At the time, Trump hadn’t even won the primary yet, and the possibility of a Trump presidency seemed a remote possibility. Anytime anyone actually mentioned Trump by name, though, Albarn edited it out of the album because he didn’t feel like giving Trump more fame than he already had. However, that bonus track that was released as a single? It’s called “The Apprentice.”

So now I had a better framework to get into the album. It’s an album of ghostly voices talking about the disaster that is Donald Trump’s election to the Presidency, seemingly in a nightclub judging by the album’s eclectic mix of danceable music genres like hip-hop and dancehall. It’s the dance party at the end of the world. And perhaps the name Humanz refers to the fact that it’s an album that gives more of a voice to the human performers than the virtual band. And seeing it through that lens, I gave the album another listen, and fell in love.

The album overflows with highlights. The first song, “Ascension,” is a an infectiously catchy hip-hop tune from a rapper I’ve never heard of before named Vince Staples. Staples puts together an amazing flow and an amazing hook with “The sky’s fallin’ baby drop that ass ‘fore it crash.” The album’s lead single, “Saturnz Barz,” featuring dancehall reggae artist Popcaan, somehow manages to make reggae sound spooky and haunted. It’s also a song that goes to show that, if you’re like me and are worried about a lack of input from Damon Albarn/2-D, your fears are unjustified because songs like “Saturnz Barz”” work largely because of Albarn’s vocals playing off of those of the guest collaborator. The same is true of “Charger,” featuring Grace Jones, which blends dub rhythms with a rock guitar as Albarn and Jones’s vocals play perfectly off of each other. “Charger,” notably, was the result of Grace Jones ad-libbing for four hours over the instrumental version of the track, leaving Albarn to piece together the best lyrics. Both “Andromeda” and “She’s My Collar,” despite having featured performers, are also songs that primarily feature Albarn’s vocals at front and center. That’s not to say that the songs without Albuarn featured heavily are anything to skip over. The song “Momentz,” featuring De La Soul, is a flawless feat of lyrical acrobatics as vocal parts are passed between members in quick and complicated patterns like a well choreographed dance routine. “We Got the Power” finishes off the album proper with a stunningly optimistic collaboration between Jehnny Beth, Noel Gallagher, and Albarn, the last two of whom were known to be bitter enemies in the 90’s and seem to have now made peace. “The Apprentice” really feels like the most straight-up diss track aimed at Donald Trump, albeit obliquely. Kilo Kish’s voice can only be described as adorable as she straddles the line between speaking and rapping on “Out of Body.” Brandon Markell Holmes closes out this whole opus singing the hopeful “Circle of Friendz” over the sound of what sounds like looting in a recently created wasteland.

One criticism that some have had of Humanz is that the order of the tracks seems to be arbitrary with no real logic to the order of everything. While I agree that this is true, I don’t really agree that it’s a flaw in the album. Like I said, Humanz feels like a dark, nightclub party at the end of the world, and the songs don’t need a particular order to tell a story or anything, the songs just keep rolling on to keep the party going.