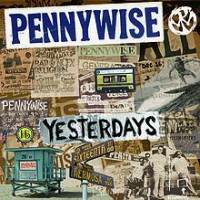 Chances are you've achieved your skateboard goals with Pennywise providing the soundtrack, even if it was just on a video game. They've been a stalwart in Epitaph Records since the beginning. Pennywise is to soCal punk rock as bourbon is to cold glassware: they deliciously define the genre and inspire greatness in man.

They've always kept their musical recipe al dente-solid and reliable in providing pure, un-cut adrenaline. Yesterdays is a 25-year-old collection of unreleased material; a set of rapid songs from before Pennywise were established. Original bassist, Jason Thirsk, wrote a lot of them. He prominently incorporated the bouncy, upbeat riffs that helped set the PMA style of the band. Tracks like "Violence Never Ending" provide glimpse of a band with a level head and yearning to be the change they want to see.

While the histories of the tracks on this album are worthy and the message is valid, Yesterdays doesn't stack up with the best of the band's catalog. Songs that Jason, Jim, Fletcher and Byron churned out in years to come beyond 1988 held dynamic build-ups and energy that just make a person want to lose their shit a little. The lyrics of Yesterdays have positive outlooks and sections of invigorating rhythm but these old tracks sound like a band yet to find their stride, even in re-recording.

. While this isn't their best, it has a feeling of the lads re-establishing their roots and preparing for the next step.