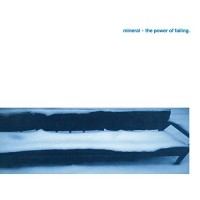 Few bands come around in life with the kind of emotive weight and pulse that Mineral bring to the table. They lasted just about five years but in that time, they helped paint one of most important emo cornerstone of the '90s. It's a shame that they were only recognized for this in retrospect. While they did end up jumping into a reunion in 2014, it was a new wave of emo bands, such as The Hotelier, taking the flag forward and paying homage to them. However in that period of time they existed, Mineral lit a fire that still burns today, on an evening where a glass of whisky feels just right. That's the evening where I look through my Sunny Day Real Estate, American Football, Kid Brother Collective or Penfold archives, and then realize... fuck it, I need to be listening to The Power of Failing.

EndSerenading, as brilliant as it was, won't ever come near this record and a lot of that has to do with "Parking Lot". For me, this is the pinnacle of emo. It meshed in slow, melodic post-grunge burns with screeching guitars and lyrics that left you breathless. In fact, few songs in life have ever come close to this standard. The way Mineral balance those soft lulls with aggressive shifts in tempos is something hard to imitate, across any sub-genre. "If I Could" and "Gloria" are prime examples of this as well. This style allows Chris Simpson to drape his lyrics on the rhythms and carry forth without ever sounding too forced or trying -- allowing you to feel the full brunt of his pain. And make no mistake, this is an angsty record.

Simpson and company pour every ounce of heart and soul into things here. Scott McCarver's guitars and Jeremy Gomez on bass are all so fluid when they combine to give a sound that even when incoherent, just makes sense and soothes you. Gabriel Wiley's unsettling work on the kit is the highlight for me -- highly underrated and fueling the band like an engine unhinged. The distorted haze that "July" stood for best represents the band to me in a nutshell -- wild chaos yet a beautiful one. It's hard to pick tracks to really cast a spotlight on because they're all top quality but the few I've mentioned here are just the tip of the iceberg. Explore the rest. I promise you won't regret it. The Power of Failing spoke to the triumph of the human spirit and warned us not to stay down when love and life tries to keep us there. It still does this, to this very day.