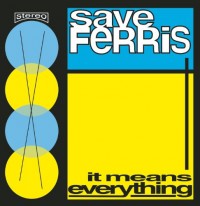 Save Ferris emerged from the Southern California scene in 1995. For anyone that missed the memo, or wasn’t born yet, Save Ferris play an up-beat mix of pop punk, ska, and rock and roll. The band released their debut full-length record It Means Everything in 1997. The record landed the band some big tours and provided the band a taste of real mainstream success, Save Ferris was playing with bands like Sugar Ray (that was a big deal at the time believe it or not), and appearing in movie soundtracks. Unfortunately, Save Ferris have not been able to live up to the past success of It Means Everything despite putting out some other releases and continued work. The bands career faced quite a few member changes and challenges, finally resulting in a break up in the early 2000’s. The band has recently reunited to release a new E.P., with that said, the focus of this review is not what the future holds for Save Ferris, but what the band delivered to us back in 1997 with It Means Everything.

There seems to be a common thread among bands that achieve success through a reimagined cover. The biggest hit from It Means Everything being a cover of “Come on Eileen” previously written and recorded by Dexys Midnight Runners. Many bands that gain notoriety via a cover song unfortunately seem to be quickly forgotten. Which in many cases is unfortunate as many of these bands have well-written and underrated music that goes unheard by the general mainstream masses. I think that is partly the case for Save Ferris. The rest of the record is significantly more interesting than “Come on Eileen”, and has aged significantly better. That being said, can you tell this record was released in the late 90’s? I think there is a good chance someone who has not heard of the band before might be able to guess this release came from a few decades past. You can almost see the cartoon and neon imagery come out of the speakers while listening.

Another point that I frequently hear when Save Ferris is brought up is the unavoidable comparison to No Doubt. These bands do share quite a few similarities including incorporating elements of funk and ska, having female vocalists that share slightly similar vocal styles and both bands were gaining attention at similar times, although No Doubt was still undeniably bigger. Save Ferris does come off as a bit more genuine that No Doubt though, a little more in tune with the punk rock and ska undertones as opposed to more mainstream rock influences. To put it in simpler and dorkier terms, Save Ferris are a little bit more akin to Reel Big Fish or Goldfinger than No Doubt was in 1997.

As far as the music itself is concerned, it is very competently played pop oriented ska-core. Save Ferris wrote catchy, feel good music that suited the time period very well. The musical chops are all there, and the lead singer displays a very impressive vocal range with memorable choruses. It is unfortunate that Save Ferris have been overlooked by many of the more recent generations of music fans. That being said, maybe you had to be there, Save Ferris definitely exude late 90’s party ska vibe with It Means Everything.

Save Ferris put out a solid and competent record with It Means Everything back in 1997. The record does sound a bit dated, but the melodies and choruses in the songs “Under 21” and “Superspy” hold up to the test of time. I think the band may have a difficult time trying to rekindle the magic that they experienced in the late 90’s, but for those of us who were there – I think this record is definitely still worth a spin.

* I am quite sure several bands could be referenced that have enjoyed continued success following the breakthrough of a cover song, but you all know what I mean.

AFI: Shut Your Mouth and Open Your Eyes