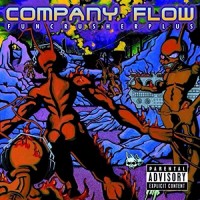 The late 90’s were a divisive time for some hip-hop fans, the genre had broken into the mainstream almost a decade earlier, and it’s golden age was either coming to an end or already had depending on whom you asked. One of the groups to emerge from this, either as a beacon of hope or a last gasp of breath, was Company Flow. El-P, Big Jus, and Mr. Len would come together to form on the last great hip-hop crews on their debut, Funcrusher Plus.

And what a debut it was, as it was one of the most fully realized hip-hop debuts of the decade … if not ever. El-P’s production was already top notch, while not as fully developed as it would later become, he was creating beats that would have held up against any of the top producers in the genre at that point. El-P’s production technique created what came off like a soundtrack to a cold dystopian future that would have been as at home as the background noise for reading a Philp K. Dick novel as it was for the rhymes Big Jus and El-P would put over them. The cold, almost industrial, nature of some of the beats had as much in common with the first Suicide album as it did more traditional hip-hop at that point.

Lyrically, the album was pure grime. It touched on the frustrations, paranoia, and anxiety of city life. But, it was by no means a gangsta rap album, owing more to tracks like the Geto Boys “My Mind’s Playing Tricks On Me” and early horrorcore groups like Gravediggaz than they likely did anything that would be considered typical fodder for a hip-hop song at this point. And they pulled it off too, as El-P and Big Jus create not just a picture, but a mood, that puts you in the center of the graffiti, drug use and addiction, and anxieties of life in New York City that fell somewhere between the burnt out housing projects of the Bronx and the lush upscale apartments of the east Manhattan.

While the album never really broke commercially, it wasn’t for it lacking in solid tracks. Any true hip-hop head need only listen to “8 Steps to Perfection”, “Blind”, “Population Control”, or “Definitive” to know this was hip-hop firing on all cylinders. It wasn’t going to compete with the more mainstream hip-hop of the day because it didn’t’ intend to. This was an album of pure artistic expression, and a middle finger to artists who would sacrifice that in the name of getting a song on the Billboard charts. And it succeeded in every way possible.

As for the influence of this album, one need look no further than El-P’s excellent solo career, the production he provided to artists like Cannibal Ox, Aesop Rock, and a myriad of others, Definitive Jux Records, and oh a little group by the name of Run The Jewels. While this wasn’t the biggest selling hip-hop album of 1997 nor even the best album to come out of the Company Flow family, its status as classic is undeniable to anyone who has ever appreciated the spoken word over a beat and vinyl being cross faded.

NOFX: So Long and Thanks For All The Shoes

Ben Folds Five: Whatever and Ever Amen