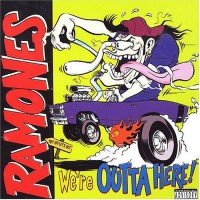 While the mid-90’s were a time where punk was starting a new era of mainstream success, August 6, 1996 was the end of an era for punk as well because the very last Ramones show took place at The Palace in Los Angeles on that day. It would be the last time Joey, Johnny, CJ and Marky would be on stage together, let alone the original line up from the band’s CBGB’s days. And to commemorate the end of The Ramones the band recorded their last show (and fourth live album) and appropriately titled it We’re Outta Here!.

This being the last time the band would ever perform live, The Ramones played a very wide-ranging 32-song setlist. They played early classics like “Blitzkrieg Bop,” “Sheena Is A Punk Rocker” and “Rockaway Beach” and later ones such as “Commando,” “Pet Sematary” and even their cover of the Spiderman theme song. And they played the entire list of tracks in the legendary Ramones fashion — fast, angry and aggressively. If you were to compare this show to footage of other Ramones shows it would be consistent with how they performed if not quite a bit better.

Where We’re Outta Here! really earned it’s epic status amongst other live punk rock albums was the other artists that the band invited on stage to perform with them. The first and easily the best cameo was when original bassist Dee Dee Ramone helped out with vocals during “Love Kills.” And now that we are looking twenty years back, the other guest appearances were pretty amazing as well. Of course, the (now) late Lemmy of Motorhead helped out during “R.A.M.O.N.E.S.” Then a young Tim Armstrong and Lars Frederiksen of a little band called Rancid played guitars and sang during “Listen To Your Heart,” “53rd & 3rd,” and “We’re A Happy Family.” Ben Shepard and the (now) late Chris Cornell of Soundgarden can be heard singing “Chinese Rock” and Eddie Vedder of Pearl Jam joins the band for their last song, which was “Anyway You Want It.”

For some reason, when discussing a list of one of the best punk shows of all time the very last Ramones show on August 6, 1996 at The Palace in Los Angeles seems to be forgotten quite often. Now that the show was twenty years ago and considering who joined the band on stage, it should definitely be up there with the rest of the greats.

After over twenty years of a tumultuous career, The Ramones wrapped it all up very well with We’re Outta Here! The band didn’t make it a huge, obnoxious ordeal out of it, but instead they did make it special by inviting those up-and-comers who appreciated them the most to join them for their last time on stage. You get the feeing when listening to this record that it was an extra special show for The Ramones, the guest performers and the audience. We’re Outta Here! captured a bitter-sweet end to one of the greatest and most influential punk rock bands of all time.

Watch footage of The Ramones playing “53rd & 3rd” with Tim Armstrong and Lars Frederiksen of Rancid at this show right here!

At The Drive-In: El Gran Orgo