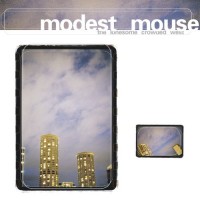 “THIS BUILDING’S TOTALLY BURNING DOWN!”

Between a scrappy debut (This is a Long Drive for Someone With Nothing to Think About, 1996) and their first major label album (The Moon and Antarctica, 2000), Issaquah, Washington’s Modest Mouse attained perfection with The Lonesome Crowded West. Recorded with Beat Happening member and twee movement pioneer Calvin Johnson, it captured the raw energy of the young trio on tape for us to use to soundtrack our indie weirdo parties and road trips forever and ever.

Getting right to the nitty gritty, first track “Teeth Like God’s Shoeshine” is a pinnacle of indie rock achievement. At nearly 7 minutes, it’s got several distinct sections like a miniature punk symphony. Tempo changes, fake-out endings, plaintive sections on the trappings of capitalism and explosions of screaming and crash cymbals. It builds to an insane outro with Brock showing his guitar specialty--whammy bar harmonics, a trick I continue to steal in my own bands. This song as well as “Cowboy Dan” and “Doin’ The Cockroach”, which I will talk about later, were re-recorded before the released by famed producer Phil Ek (Built to Spill, The Shins, Mudhoney and tons more) to “make them sound good, but not too good as Up Records cofounder Chris Takino put it, and Ek did just that, retaining the heart of the tunes. Next, “Heart Cooks Brain” is the best rock song ever to use record scratching (we all know that’s a tricky combo that usually sounds dumb), because it’s used simply as an addition to the rhythmic groove of the song and doesn’t steal the show. Within the song are a plethora of amazing lyrical couplets, with 21-year-old Isaac Brock having already lived a lifetime’s worth of hardships thanks to shitty parents, poverty and crazy living conditions. He prefered to hit the road because to him the van wasn’t “roughing it.” He honed these lyrical skills all over the country, with him nightly spitting lines like ”I’m on my way to I don’t know / My brain’s the burger and my heart’s the coals” and “My brain’s the cliff and my heart’s the bitter buffalo.” Comparing a lyricist to Dylan is like, totally lame, but really, Brock can spin a yarn so nutty that 4 minutes seems like 2 because you’re so engaged, just as Dylan did back in his heyday.

“Convenient Parking” and “Doin the Cockroach” are two prime examples of how much this young trio could kick ass. Both lull you into a false sense of security and then bust wide open with Brock screaming melodically, and in “Doing The Cockroach,” asking people talking ‘bout TV to PLEASE SHUT UP!. I always try to imagine what The Cockroach dance would be like, and in my mind a bunch of teens in the 60s are creeping around to the beat, spreading disease. This album inspired numerous indie bands to “get dancey” around the turn of the century, and while Franz Ferdinand, The Killers, The Bravery et all had their moments, none had close to the heart or spastic energy that Modest Mouse had and still has, in their old age, to a slightly lesser degree.

I could mention every song on this album and the temptation is great to make this review a few thousand words long. “Cowboy Dan”? Jesus, it’s another touchstone of 90s indie rock amongst an album full of them. The song screams 2017 despite being written 20 years ago-- ”I’ve got mine, but I want more” couldn’t apply more to today’s political climate, with conservative buttholes who insist on smaller government while grabbing as much money and real estate as they can for themselves. The tune begins with an eerie reverb-laden guitar noodle, begins to stomp, then cools back off even more and changes keys. It ramps back up over the course of 6 minutes, and the stomp gets harder and harder til it breaks through your floor. “Out of Gas” rides a solid groove while Brock spits killer lines like Outta gas, outta road, outta car / Don’t know how I’m gonna go. / I had a drink the other day / Opinions were like kittens I was giving them away” and tongue twisters in the chorus with ”You will come down soon too / You will come down too soon.” He really is one of the best wordsmiths of our time.

I’ve written a lot already and I haven’t even gotten to my favorite song. “Trailer Trash,” pulled from Brock’s experiences with poverty and his observations of friends, neighbors and relatives trapped in that cycle, the song uses minimal material to maximum effect, riding the same three-chord progression for over five minutes. The guitar parts change over top of those chords with arpeggios switching off with gentle, clicky palm muting, and when the song rocks to it’s climax near the end, Eric Judy’s bass provides melodic support. He is such an underrated power in the indie rock world, truly one of the most inventive bass players out there. (Unfortunately he quietly left the band in 2012, now playing in a group called Rudy Waltz.) Jeremiah Green’s tom filled beat keeps your toe tapping throughout “Trailer Trash”, not to mention the rest of the album. “Trucker’s Atlas” was built entirely around his drum groove, a style of playing with the focus on toms and upbeat hihats that has been emulated by indie and emo drummers since. The 11-minute song is a beast, exploring all corners of the US, and is one of many perfect road trip anthems Modest Mouse has penned. With all the groove based tunes and full-on ragers, “Long Distance Drunk” slows things down with a unique freak-folk feel, “Jesus Christ Was an Only Child” gets into a hoedown complete with shredding fiddle and some odd manipulated background vocals to keep it in the MM wheelhouse, and “Bankrupt on Selling,” the first song from the album I learned on guitar back in college, gets jangly, peeled back to acoustic and gentle clean electric. “All of the apostles, they’re sitting in swings / Saying, ‘I’d sell of my savior for a pair of new rings / And some sandals with the style of straps that cling best to the era” also rings out perfectly in the age of republicans using their faith to evil ends in Washington, DC. Pence, I’m looking at you.

There is not a weak moment on this album, because the intentionally ragged nature of the recordings and the spunk of the songs means even the odd moments (like how the chorus of punk tune “Shit Luck” starts with a different bass root on the second chorus, seemly by accident and left in the record) are performed with a don’t-give-a-shit-we’re-rockin-here-dude attitude that it’s all part of the fun. If you haven’t seen the mini-doc about Lonesome Crowded West that Pitchfork hosted a few years back, I would highly recommend it if you’d like to hear all the members of the band and all producers involved. For today, I think that’s all I have to say about the album though if you gave more time I’d write another several hundred words. There is just too much awesomeness in this record.