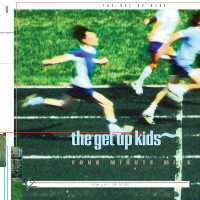 I’m going to paint in broad strokes here, but I like to think of it like this: There have been three generations of emo. The first generation, or as we could also call it, emocore, was born in the 1980s and was literally D.C. style hardcore punk, played more melodically, with emotional, rather than political, lyrics. There were a handful of these bands, but Rites of Spring were the originator and most well known band of this generation. The second generation in the 90’s, which I’m going to call post-emo, is when the emotionally wrought lyrics and singing of emocore were blended with softer punk, or even indie rock and post-rock. This is where you get bands like Sunny Day Real Estate and early Appleseed Cast. Then you get the third generation in the early-2000’s, what I like to call the pop-emo phase, where the music shifted its musical base from indie and post-rock to pop-punk in the wake of Blink-182’s success, and that’s when emo finally became mainstream. That’s when the word “emo” turned into an insult so widely used that no emo band wanted to call themselves “emo.”

I’ve always seen The Get Up Kids as the bridge between the second and third generations of emo bands. They’re certainly not hardcore, and they definitely have elements of pop-punk, but it’s not a overly bouncy and infectious pop-punk you might hear from one of the more mainstream, big name pop-emo acts like Fall Out Boy and My Chemical Romance. At the same time, The Get Up Kids reach back into the post-emo era to borrow from the indie rock vibe at times, but also, at times, to borrow the more raw, unpolished melodies of the post-emo and even the emocore eras, particulary on Four Minute Mile.

Four Minute Mile is an album that is often overshadowed by its successor, Something to Write Home About. Most Get Up Kids fans, myself included, would point to Something to Write Home About as the Get Up Kids’ best album. But the way that Something’s popularity dwarfed Four Minute Mile was unusual. I’ve been to a lot of Get Up Kids concerts in my life (and they’re very good live if they’re sober) and there were a few years after the release of Something to Write Home About where the only song in their set list from Four Minute Mile was “Don’t Hate Me.” I even remember one concert where people were shouting out requests, and I actually shouted “Anything from Four Minute Mile!” to which a guy near me looked at me and said “I know, right?” Thankfully this didn’t last long, and if you see them live today, as I last did at Riot Fest Denver in 2015, they have a wider variety of their songs from all of their albums except for There Are Rules, and the less said or even thought about that album, the better.

What I love about Four Minute Mile is that there’s an immediacy to the album’s emotion. This doesn’t sound like an album full of songs about breakups and relationships that happened four years ago and that the singers had moved on from. Every song sounds like the singer, either Pryor or Suptic, is on the verge of tears. Opening track “Coming Clean” is a prime example, as the album opens on a note of absolute urgency and a singing style that’s somewhere between screaming and begging. “Don’t Hate Me” is the most popular song on this album, and that’s largely because the chorus is a crude but effective pop hook, and because it’s remarkably easy to rhyme with Amy. I don’t mean that to defame the song. As a matter of fact, I love the song and, as crude and jagged as that song’s pop hook is, the Get Up Kids never really came up with a better one. The keyboards add in just the necessary touch to make this song exactly the pop song it needs to be. In fact, this album has a lot of keyboards on it considering that keyboardist James Dewees wouldn’t join the band until Something to Write Home About.

While the album mostly barrels through with the most punk sound that The Get Up Kids would ever produce, it slows down for a few heart wrenching slow songs, too. “Lowercase West Thomas” and “Better Half” swirl with guitars that are vaguely reminiscent of the post-rock associated with second-generation emo. And, for all the love that Something to Write Home About’s closing track “I’ll Catch You” gets, Four Minute Mile’s closer, “Michele With One ‘L,’” is just as good, if not better.

If you’re the kind of person who dismisses emo out of hand, I’m never going to sell you on Four Minute Mile. But then, I don’t think you should really dismiss anything out of hand. If you’re one of the people who generally skips over Four Minute Mile because you think of Something to Write Home About as where this band’s career started, I understand where you’re coming from, but go back and listen to Four Minute Mile. It’s the blueprint, the rough prototype if you will, for everything that would come in their future career. It may not be as good as its successor, but it’s still a very strong debut album, and deserves to be judged on its own merits.