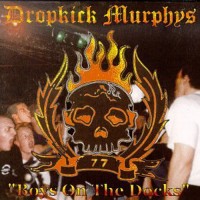 Most people’s introduction to Dropkick Murphys probably came in the form of one of their Hellcat full lengths, likely their debut Do or Die (1998). Their EP Boys on the Docks came out only a year earlier, but shows a much different band. It’s a six song, 14 minute recording with no sign of the celtic influence that would one day come to dominate DKM’s sound. It was recorded by the short lived original lineup featuring MIke McColgan on vocals, Rick Barton on guitar and Ken Casey on bass. The drummer was Jeff Erna, who would be gone before their debut LP. McColgan would be gone after the first LP. Barton would make it through the first two.

Boys on the Docks was straight up street punk, and McColgan and Barton were the primary songwriters. Half of the songs would be recorded again later. An acoustic version of the title track and a sonically upgraded take of “Never Alone” were included on Do or Die. “Caps and Bottles” would eventually make it onto Sing Loud, Sing Proud (2001). The Business also recorded “In the Streets of Boston” as “In the Streets of London” for their split with Dropkick Murphys.

Overall, Boys on the Dock is a solid punk EP, but that’s really not the most interesting thing about it. The most interesting thing is listening as Dropkick Murphys transform from a decent punk band to an iconic one. Do or Die is without a doubt one of the most influential celt-punk LP’s of all time. If DKM had not gone on to fortune and fame, these six songs would probably be lost to history. The band would be long gone and only mid to late 90’s Boston scenesters would even remember their name. As it is, they’re still available for us to explore and enjoy.