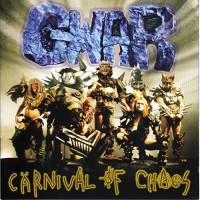 Planted firmly in the center of GWAR’s “middle era,” Carnival of Chaos bore all the trappings of that era for better and for worse. Following the rising stature granted to them by the release of the seminal Scumdogs of the Universe and America Must Be Destroyed albums, GWAR seemed unsure of how to proceed. They had flirted with the mainstream through a Beavis and Butthead appearance as well as obscenity charges related to singer Oderus Urungus’ exposed (and clearly fake) giant rubber dong. In doing so, the band seemed somewhat frustrated by the time Carnival was released- they had tasted mainstream success but seemed forever to be denied the whole pie.

So, during this period, as best exemplified by Carnival the band amplified what mainstream audiences seemed to like about the band at first glance- their irreverent brand of gross humor. Now, to be fair, comedy had always been a central element of the band. But, on earlier tracks like “Salaminizer” and “Morality Squad,” the band had used humor to comment on the grotesque flaws of humans- on those two tracks, gluttony and hypocrisy, specifically. It also helped that those tracks were anchored by some of the most ripping, exciting thrash metal of the period.

Yet, on Chaos, the band’s underlying ethos was painted over with broad strokes. Opening track “Penguin attack” isn’t a half bad mid-tempo metal stomper. But, it’s simply an amusing about fighting nuclear penguins. “Sex Cow” was about a sex cow and that’s about it. Now, to be fair, the band did address some of their more topical issues. Ramones referencing “first rule is” commented on war and “back to Iraq” covered governmental interference on foreign nations. And indeed, the Slymenstra Hymen sung “Don’t need a man” cleverly used ‘20s piano-jazz as a way to not only lash out at male dominated metal, but also to show that strong feminism has always been in music.

But, those aspects are clearly pushed aside in favor of the wacky songs and as we all know, wacky songs which main purpose is to be wacky get less amusing with every play. It also didn’t help that the swinging momentum of the early releases had been replaced with a steady, clomping. Where songs used to storm forward to an end, now they just sorted of started and ended. “Sammy” exemplifies this precisely.

The album wasn’t a complete disaster. If anything, it showed that the band was able to write decent songs outside of their thrash metal comfort zone and also it provided some live show soundtracks- “Penguin attack,” featuring Oderus punting penguins into the audience like Rod Stewart with his soccer balls was a particularly nice touch.

Perhaps, more than anything, Carnival proved the underlying strength of the GWAR concept. That is, GWAR doesn’t need to try and be funny. As Scumdogs, AMBD, War Party and Bloody Pit amply showed, GWAR is funny simply by the virtue of being GWAR. And in that context, when they comment on something grander themselves, not only do they reveal a surprising depth to their music, but they comment on the human condition with deft humor so few other acts are able to convincingly pull off. Yet here, on Carnival, it was underscored that when GWAR wrote jokey songs for the sake of jokey songs, it was simply too obvious, too simple, and too much.

Dropkick Murphys: Boys on the Docks

Rollins Band: Come In and Burn