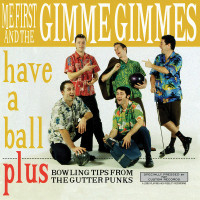 Me First and the Gimme Gimmes. Punk rock’s most famous cover band. It is strange to look back on twenty odd years of their material and think that, when they first started out, the act was hilariously novel. Sure, punk bands had done covers before here and there but never was there a group, nay- a super group- whose sole intention was nothing but cover songs.

Although MF&tGG had released a few singles, for many of us the first exposure to the band was the 1996 Fat Wreck comp Survival of the Fattest, which featured their cover of John Denver’s “Country Roads.” After that it was a wait of over a year until the band released their first official LP, Have a Ball.

HaB isn’t as much a studio album as it is a collection, being comprised partly of songs from their existing singles, and partly of songs that would appear on later singles. Its roster of primarily late-60’s through 70’s songs (1983’s “Uptown Girl” being the notable exception) was, and still is, a hoot to listen to.

The reason for this is fairly clear- typically if a punk band covered material of this vintage, it was done tongue-in-cheek, snide, or just noisy. “Let’s see how fast we can make this hippy song” seemed to be a common trait. But then MF&tGG came along and treated the original songs with respect. This was the music that your parents had listened to when they were young, and now here was a punk band that was playing these songs in a way that showed thought in composition. How best to adapt these songs while NOT just turning them into noisy punk.

Sure, this had been done before (a great example being Smoking Pope’s cover of “Leather and Lace” on their 7” split with Groovy Love Vibes), but never with this being the single, driving concept behind the band.

In some ways this album opened a door, allowing punk bands to unashamedly explore other genres looking for songs to cover, and to then compose those covers in ways that were aesthetically pleasing to the ear. Don’t get me wrong, covers like Screeching Weasel’s version of “Runaway” are still a blast to listen to. But the melodic style of punk that MF&tGG applied lends itself well to cover material from other genres.

That is the album’s lasting impact on punk in general. Is it the best MF&tGG album? Not at all. Their follow-up albums Are a Drag and Blow in the Wind are the two releases vying for that title. The production values on this are kind of mushy, and Spike Slawson hasn’t really found his voice yet. The guitars are a bit sloppy, but the percussion is in top form.

What it did do is provide a bit of levity at a time when punk music was either too serious, or too snotty (remember, this is year that Blink-182 broke big with Dude Ranch). Plus, you finally had a punk album you could listen to with your mom and dad.

Land of Talk / Half Waif: live in Allston